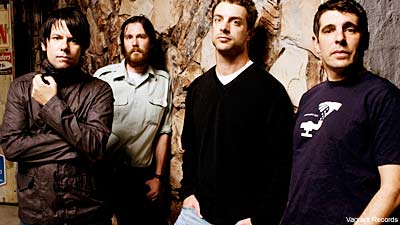 In 1999, Sacramento rockers Far, the band behind 1990s cult classic, 'Water and Solutions,' called it quits. Part of the reason for the split, according to guitarist Shaun Lopez, was frontman Jonah Matranga's desire to branch out on his own, as a solo artist. Matranga did just that, and also released material as Onelinedrawing and with bands New End Original and Gratitude. So we asked Lopez what he thought of Jonah's post-Far music?

"As a musician, I think Jonah is amazing," he says. "A very, very talented dude, and I consider myself talented as well. But the thing is, in a second way, I think both projects we've done -- obviously, he's done several -- I think they all have been good, and Revolution Smile was my band, and I think we were a good band and made some good music. I just think there's something about chemistry...you can't just create it, and with these new songs, I'm just like, 'Wow.'"

Far is halfway through the final mix for their forthcoming, as-yet-untitled record, the band's first since 'W&S,' and looking back on what he and Matranga both did outside of the band, he knows he was meant to make music with Jonah.

"It's like, Jonah, on his own, he's a talented dude. I just feel like he's missing something else," Lopez says. "And my stuff, I can look back on it now, and I think its really good, but I still think it was always missing something. So, I have to give him credit. I'm not going to badmouth the dude. I think his stuff was just missing something that lots of people thought was missing. People would always bug us about Far, and when we were going to play shows. We knew people were still interested in what we were doing, but there was always something missing. And when he and I come together, something happens. I always thought that stuff before was bulls---, but listening to the new songs now, and the way they were written and came about, it almost seemed effortless in a way."

Lopez thinks that Far's reunion is one of the rare reunions that's worked. So far. He's feeling confident about the new material, and what people with think of it when it's released early next year."

"I'm not going to name names or anything, but I feel like a lot of times, when bands get back together and they make another record, it just sounds so lame," he says. "I don't know if they're doing it to get paid, but a lot of bands put out these records, and I kind of feel like people just want to hear the old s---. Its cool and all, but they want to hear the old s---. I just feel like we have something here, and the songs are great. They're very different, but when you hear them, to me, it still gives me that same feeling that Far gave me ten years ago."