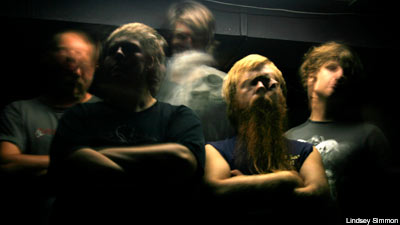 "There is always ... always music going on," guitarist Rob McKinney of Evil Bebos remarked on the house that the members share together in Nashville. "There is always a show every week we're playing." Now not all those shows are for Evil Bebos. There are two other bands comprised of the other eight roommates cohabiting in the house.

The two other bands are the post-rock Ascent of Everest, which four members of Evil Bebos now play in, as well as the noisy pop rockers Heartbeater, which has only two Bebos players in it. With such a close-knit tie between bands, fans are taking the time to hear the connections. For Evil Bebos, this means people hearing their orchestrated riff epics that would usually never give them the time of day.

"I've heard dozens of people tell me 'I didn't like metal until I heard your band, and now I like metal,'" McKinney smiled. "It's a pretty awesome thing to spread the gospel of heavy music." Many of these metal new bees are coming from the post-rock side, which he thinks make sense for them to get into metal. "I think the Ascent of Everest is a good jumping point as it's got heavy moments but it's not crushingly doomy."

It was only recently that Evil Bebos relocated to Nashville. Before the band resided in the small Tenn. college town of Murfreesboro, where everyone met while studying recording. "Most of us met when we were freshmen in the dorms so we were stupid 19-year-olds looking for someone to drink beer and smoke pot with," McKinney said.

The move was all about getting everyone's band better shows and more opportunities. "Nashville just has more venues and more bands and cooler shows coming through," says McKinney. And the band has gotten to play these coveted shows almost as soon as they showed up in town opening up for bands like Rwake, Hull and US Christmas. McKinney added on the move, "We haven't been in fights with each other. Were really happy."