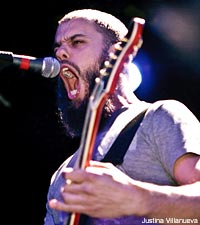 In fall of 2008, I watched a show at Bowery Ballroom that made me want to toss my camera and join the pit. Just a year later, the same dudes are on the same stage and I'm having the same feelings. (Note: I really love my cameras. They pay the bills.)

What marked the best band to watch last year will probably be the same this year: Baroness. These Savannah-bred boys aren't topping year end lists and landing on the cover of Decibel for no reason. They got it, and the 'Blue Album' proved so.

Downstairs at the main bar, a hurricane of swirling guitars radiated the ceiling. It glowed from the sounds. Upstairs Earthless was jamming. No, really jamming. 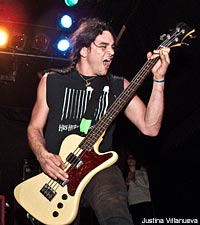 The crowd was hypnotized and nodding their heads to the grooving set. This, however, did not match the much anticipated Baroness' set reaction. "Oh! Baroness!" fan shouted and caught bassist Summer's attention as the band played the beginning of 'Grad.'

The whole band was just glowing with excitement. "We wouldn't be here if it weren't for you guys." Baizely then said he wanted to meet and talk to all their fans. A thunderous roar for "one more song" swarmed the large hall before the foursome returned. "I thought encores only happened at stadiums," Baizley joked.

They are just such a modest bunch. You can catch Baroness on the road. Select dates are with Earthless and US Christmas, and others are with Iron Age and Dark Castle. Their U.S. dates end on Dec. 11, when the band plays with Pig Destroyer, Torche and Iron Age on the 'Hell' stage at The Masquerade in Atlanta.