The U.S. Eulogy Records Tour, featuring Donnybrook, Creatures, Rhinoceros and Knock 'Em Dead will commence in January of next year, with Living Hell, xTyrantx and Shattered Realm appearing on select dates. So in preparation for the trek, several of the bands on the bill spoke to Noisecreep about which of their labelmates they want to see most, if there will be some sort of friendly, onstage competition engaged upon, if they will wear one another's shirts while performing since laundry is a luxury often inexperienced on van tours and other backstage antics that'll burn the tour into their memories for decades to come! 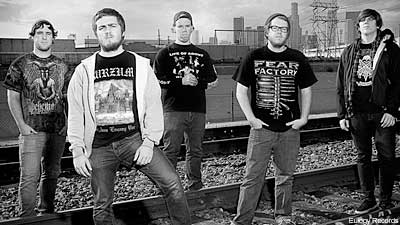 -- Who do you want to see the most? "I'm really excited to see Shattered Realm, Living Hell and Donnybrook."
-- Is there any sort of friendly, onstage competition? "I don't really think there will be competition so much. Just a bunch of cool bands shredding"
-- Do you wear one another's shirts? "I'll wear any shirt.".
-- Will there be any backstage antics? "Uno, beer, fireworks." 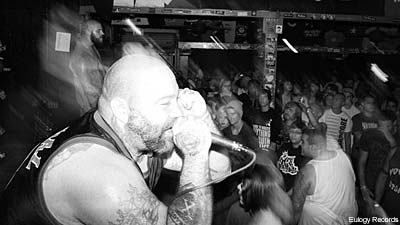 -- Who do you want to see the most? "I'm stoked to see Donnybrook every night, since 'Lions in This Game' has been in regular rotation since that joint came out years ago. I heard Creatures kills it live; can't wait to circle pit for them."
-- Is there any sort of friendly, onstage competition? "There are some pretty big boys rolling on this tour. I can see some buffets across the country getting shut down, so yeah maybe an eating competition or two?"
-- Do you wear one another's shirts? "I plan on going shirtless for 365 days straight in 2010. I gotta stick by my word."
-- Will there be any backstage antics? "Straight hooliganism." 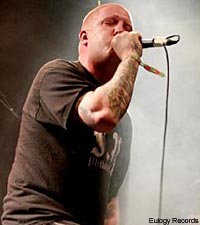 -- Who do you want to see the most? "I want to see all my friends that haven't seen us out on the road in awhile."
-- Is there any sort of friendly, onstage competition? "Eating s---, jerk-off contests and probably some form of drinking games and some grave robbing."
-- Do you wear one another's shirts? "Danny from Shattered Realm will wear anyone's shirt on stage. Joe None will wear the other bands shirts because he doesn't pack a lot of shirts for tour. I wear only good band t-shirts, so I will not be wearing any of these bands shirts."
-- Will there be any backstage antics? "Coke parties, arm wrestling, tack and staple wrestle matches and competitive and creative eating contests." 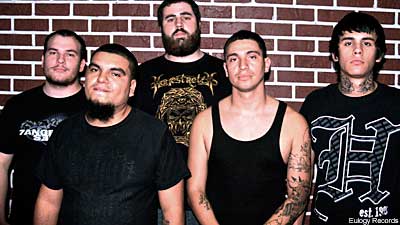 -- Who do you want to see the most? "We are looking forward to seeing Creatures and all the rest of the Eulogy bands."
-- Is there any sort of friendly, onstage competition? "Naw, there won't be any friendly competition cause we've never played with any of these bands."
-- Do you wear one another's shirts? "Most deff."
-- Will there be any backstage antics? "Only time will tell." 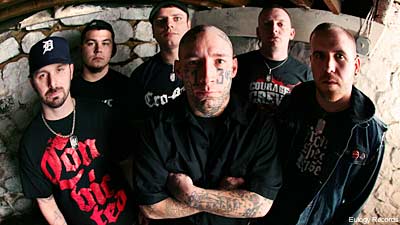 -- Who do you want to see the most? "xTyrantx is really good friends with Rhinoceros and we have toured with them before so it's gonna be awesome to do some of these dates with them, we always have fun together, but we are definitely looking forward to checking all the bands out."
-- Is there any sort of friendly, onstage competition? "No, not really we all have a different sound and most of the guys in the bands are all cool people so probably just have a ton of fun messing with each other."
-- Do you wear one another's shirts? "I'm going to be wearing our own merchandise on stage. That's coming back from when I saw Terror a few months ago and almost the entire band was wearing their own merch and I was like that's awesome!"
-- Will there be any backstage antics? "A lot of kneel and push, you know, where someone kneels behind a person standing and the other person pushes them over. Hopefully there will be a lot of Joe from Rhinoceros yelling at his band members or Dave yelling at one of us for not tightening it up."