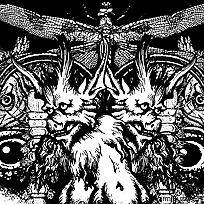 Thrashy crust punkers Early Graves are releasing their new platter, 'Goner,' via Ironclad Recordings. The record, which is mired in lyrics about self-sabotage, was recorded in analog by Tim Green.

"We recorded analog because it sounds better to our self-imposed elite ears," guitarist Chris Brock told Noisecreep. "And we wanted our new record 'Goner' to be the exact opposite of all that trippin' pseudo 'metal' that comes out where the bands wear pink shirts, act like big fat turds, or worse and the bane of my existence, are a 'Christian metal band,' which is in itself an oxymoron. We also didn't want our album to sound like all the Meshuggah clones, because let's face it, they are an anomaly and their code has been replicated but not duplicated. Yet."

On a more detailed note, the band elected to record 'Goner' in analog form for a host of other reasons, mainly "because it fits the actual songs," Brock said. "It's rough around the edges, has flaws and is organic. But it's f---ing real and it's f---ing heavy. Recording in analog seems like a crazy thing but it's how music been recorded for most of the time, and it's pretty easy. You buy two-inch tape and get them calibrated and then set up your drums and amps in a room with some mics on them and hit record."

In addition to markedly improved sound quality, another reason Brock chose analog was because it goes against the grain of what metal bands do nowadays: no one records in analog. Brock said, "You can turn on a million of these so-called heavy albums and there are sound replaced drums that a drummer could for example play the drums at a whisper level and have it replaced digitally via triggers to sounds like the drummer has 15 arms and is recording in the belly of Satan at 3,000 beats per minute; guitars recorded where every single riff can be punched in and made to be 'perfect'; vocals can be recorded so that even the most of out-of-key singer can sound like he has pipes from the heavens.

"The result of all of this bulls--- is that the bands end up sucking live because their records aren't real, and a lot of these recordings sound the same because a lot of times, the bands will have the same 'sample' for their drums or same 're-amp' with their guitar. That's not to say that this method of recording doesn't have its place. But it sounds redundant to my ears after a while."

This type of doctoring makes for lazy bands. Brock reasoned, "There is no need for bands to practice and make their band sound tight before they go into the studio because they can just have the engineers play doctor and make them sound perfect, like all the other bands doing the same thing. Guess what guys? Meshuggah already exists. And you are not them. So stop! When you hear our record, it's not perfect. There is feedback bleeding all over the record. There are mistakes. There is natural timing changes sometimes within the songs that we might not have planned on.

"But if you choose to hear it, rest assured that its really the amps we played in the studio. And that's its Dan's drumming that you are actually hearing. And that sometimes the guitars don't stop in the same exact places. And the bass sounds like a huge Mac truck on maximum overdrive. And sometimes Makh's vocal chords are being pushed to the literal point where they can't go any further. And that there is not editing to make us sound better."

Still with us? Brock finished, "Our record sounds like it does for better or for worse, because we spent three months writing and practicing all the time, and then seven days tracking all of parts to tape -- and the result is 'Goner,' something I personally am proud very of."