"One of the problems about Megadeth is that we've been severely misinterpreted by the press. I'll say something in an interview, and they'll either take what I said completely out of context or they evaluate it based on one sole statement and not the whole idea," Dave Mustaine tells Noisecreep.

We're on the phone with the Megadeth guitarist/vocalist discussing the upcoming remastered and expanded 20th Anniversary Edition of their hit Countdown to Extinction album when the subject of the media comes up.

"I've made political statements my whole career," says Mustaine, 51. "I find it so un-American that we all hate people in this country now just based on who they say they are voting for. Whatever political party you are -- hey, more power to you. I'm an independent. I saw that actress, Stacy Dash, getting killed in the public just because she said she was going to vote for Mitt Romney. I thought to myself, 'Damn! This is not who were are as Americans. We're better than that.' It was disappointing."

Out on Nov. 6, the Countdown to Extinction reissue pairs the remastered original album with a 1992 concert, recorded live at San Francisco's Cow Palace, which has never before been released in its entirety. With politically charged songs like "Foreclosure of a Dream" and "Symphony of Destruction," the album couldn't be reissued at a better time.

By the time of Countdown to Extinction, Mustaine was already politically outspoken, a fact he says threw a lot of folks in the mainstream for a loop. "The title track of the album was about animal rights and the dichotomy of a metal band writing a song about that was unheard back then. Most people in the mainstream media we were sacrificing animals, but here we were sticking up for their rights."

Mustaine also did his part to get Megadeth's audience to vote in the 1992 presidential election. "I got to be part of the Rock the Vote movement and I helped get a bill passed into law. I've had my hands in politics -- I've been to the White House, met a president. I got to cover the Democratic National Convention for MTV, which was an honor and a privilege to be the unofficial spokesperson for the disenfranchised youth of America at the time.

"I was there asking people questions no one else was asking. Not to mention that most people think that heavy metal fans and musicians are stupid. I would go in there and they would start looking at me like, 'What is he saying? Why doesn't he sound like Spicoli?' I shocked them," the singer laughs, referring to the lovable yet burnt-out that was played by Sean Penn in the 1982 teen classic, Fast Times at Ridgemont High.

Watch 'Foreclosure of a Dream' Video

Mustaine says he's sick of what he sees as an ultra-liberal media double standard. "The public doesn't have the time to learn all of what is happening out there. Everyone is busy trying to survive. Who would have ever thought that someone as powerful as Ted Turner would go on the Piers Morgan show the other night and actually say that's it's good that there are American troops committing suicide. Are you kidding me? I was stunned. But it didn't make the media like other things do because Turner is a liberal and he's part of the liberal media and they've squelched it so no one sees it.

"Whether you're a Republican, Democrat, liberal, or even a Communist, you should be outraged about what Turner said. He probably realized he messed up in the interview and said to the folks at CNN, 'Don't cover this or I'll fire you.' He can do that. CNN fired Amber Lyon because she wanted neutral, and unbiased reporting."

Before finishing the interview, Mustaine leaves us with this: "I remember reading about something when Walter Cronkite was still alive. It was about this news team working in a newsroom. They had just decided that they were no longer going to use a news producer and got a television producer instead. So the television producer says to the room, 'So what do you have for me today? Let's run down the stories.' The reporters then tell him all of their news items, but then he says, 'I know, but what's the story?' He wanted something juicier.

When news is turned into some kind of reality-based TV thing, instead of just the facts, we're in trouble." 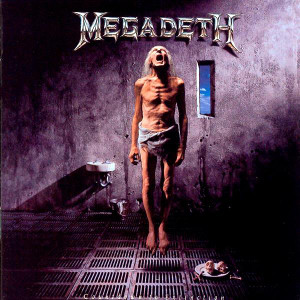