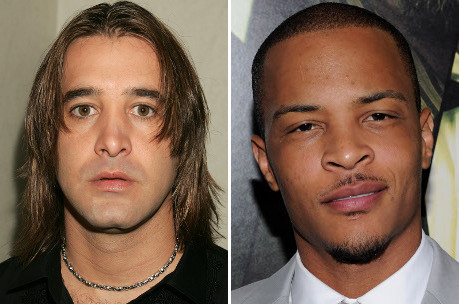 Creed singer Scott Stapp has released his memoir, Sinner's Creed, and while on the promotional trail for the book, he revealed that rapper T.I. saved his life after a suicide attempt. Wait, what?

During a visit to VH1's Big Morning Buzz Live, Stapp shared that he had checked into the penthouse of Miami's Delano Hotel during a drug binge. A penthouse in South Beach? That can't be bad.

Uh, actually, it was worse. The singer was severely sleep-deprived, awake for days and hearing voices. He was thinking cops were coming through the door and thought he was trapped in an asylum. To escape, he jumped over the balcony, tumbling 40 feet.

Stapp ended up with a fractured skull, broken hip and busted nose. He was left immobile and laid there for two-and-a-half hours when a guardian angel finally showed up.

That guardian angel was T.I.!

"He immediately took care of the situation and saved my life," Stapp said.

The rocker and the rapper had some history. "I had met T.I. back in 2004, we were both writing songs for The Passion of The Christ soundtrack and we had briefly interacted there and knew what each looked like. We'd talked about being fans of Alabama."

Their fateful second meeting took place in Miami. Stapp continued, "It's ironic - he walked in, and I found out later it was the only room left in the hotel and he came in off the street and came out, and as I'm laying on the ledge, blood fell to his feet and he looked up and he had an Alabama hat on. I said, 'Roll tide,' and then he looked at me and put two and two together and really saved my life."