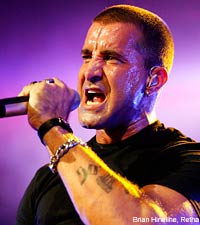 For one of the most popular bands of the last decade, Creed sure didn't get a lot of respect in their first go-round. However, none of that mattered to the 10,000 or so fans that packed the PNC Bank Arts Center in Holmdel, N.J. to see the band on their comeback tour. It's been eight years since the quartet released an album -- and five since they officially broke up -- but with other '90s acts (Faith No More, Limp Bizkit) reuniting, and the apathetic reaction to both vocalist Scott Stapp's solo album and other members' post-Creed band Alter Bridge, it seemed inevitable that the band would put aside their differences and get back together.

Their time apart seems to have done Creed well. Back with original bassist Brian Marshall, the band sounded as polished as they do on record. The newly-shorn vocalist Stapp seemed grateful to have the undivided attention of the arena, many of whom knew the words to every song played.

The band was aided by an impressive stage show featuring plenty of pyro, fireworks and, during "What's This Life For," a cascading shower of sparks. There was a catwalk jutting out into the crowd, as well as ramps leading up over drummer Scott Phillips.

As far as the set ifself, it was a mixture of their ubiquitous singles ('Higher,' 'Torn,' 'My Own Prison') and album tracks like 'Ode' and 'Say I.' The band also unveiled two new tracks from their fothcoming album, 'Full Circle.' 'Overcome,' the first single from the album, which is due in Oct. 27, was a muscular rocker that should be another radio smash from the band. The title track was less invigorating, but still had the crowd on their feet. While unlikely to convert any non-believers, their live performance showed that fans are greeting the reunion (and likely their subsequent album) with arms wide open.