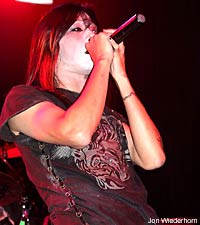 The only Taiwanese black metal band to create a stir outside their homeland, Chthonic have a strong message to compliment their volcanic music. "F--- China, free Tibet!" Freddy Lim shouted to the masses in the middle of the band's tight, ferocious set opening for Satyricon at their New York gig Oct. 25.

Chthonic's plea to China to recognize Taiwan as an autonomous entity is the driving force behind the band's exotic sound. In addition to playing traditional elements of orchestral black metal and thrash, Chthonic color their music with Taiwanese melodies; at one point, Lim brought out a stringed instrument called an Erhu, which created a baleful moan to accompany the band's clamor.

Chthonic's striking presentation matched their powerful songs. Lim -- decorated in white face paint, black lipstick, eyeliner and a Taiwanese symbol across his forehead -- looked fetching when he wasn't growling, snarling and thrashing his head hard enough to cause a nosebleed. 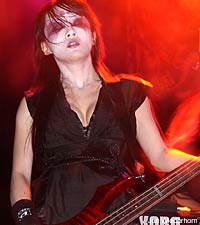 Guitarist Jesse Liu, meanwhile, sported thicker eye makeup and red Taiwanese lettering angled across his face to look like stitches. Though he was the sole guitarist, Liu kept the rhythms dense and churning during songs culled mostly from the new 'Mirror of Retribution' and 2005's 'Seediq Bale.'

Both keyboardist C.J. and drummer Dani obscured their faces for the whole show (the former using a bandana with holes for eyes, the latter with a bondage device that covered his nose and mouth), perhaps as a gesture of how they refuse to recognize -- or be recognized by -- Chinese tyranny.

And for those who wanted more than the rage and despair, bassist Doris Yeh was happy to oblige. Dressed in a short black skirt and tight blouse, even the swirly purple symbols on her forehead and the tendrils of makeup around her eyes couldn't mar her natural sex appeal. And fortunately, even her natural sex appeal couldn't get in the way of her visceral bass playing.