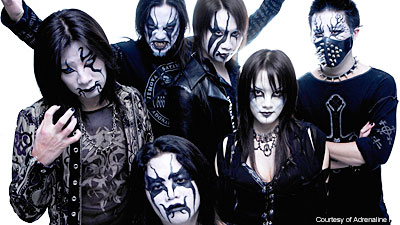 The only rockers we've actually heard of from Taiwan, Chthonic are a savage and political black metal band that incorporates instrumentation from the Far East (including the violin-like erhu) into their Western-inspired sounds. The band has been raising eyebrows and pushing buttons since they formed in Taipei in 1995 and released five albums to date.

Their latest, 'Mirror of Retribution,' is full of crushing riffs, feral blast beats and demonic vocals that transcend boundaries and redefine heavy. So it makes sense that guitarist Jesse Liu's iPod is filled with a good dose of black and death (Behemoth, Cradle of Filth, Zyklon, Black Dahlia Murder), some solid thrash (Hatesphere, Megadeth) and even new wave of American heavy metal (Lamb of God, Killswitch Engage). What we didn't expect were two tracks by My Chemical Romance and one by Silversun Pickups, but that's what iPods are for -- to reveal the breadth of our listening habits and expose our guilty pleasures.

Out of the 19 tracks Liu summoned , three were by Pantera. "They're my favorite band of all time," Liu tells Noisecreep. "What can I say about them. Pure awesomeness and very inspiring."

Given Liu's considerable skills, it makes sense that the guitarist admires Megadeth frontman Dave Mustaine. But, given the heaviness of Chthonic, we were a bit surprised that he seems to favor the band's most commercial offerings over their loudest. "I totally love 'Youthanasia,'" he said, defending the inclusion of 'A Tout Le Monde' on his list. "For me, this is the best album from them, and I'm also inspired a ton by them in this song."

Along with his list, Liu provided some revealing commentary that may shed some light on his performance style. Of Cradle of Filth, he says, "That was the first black metal band I listened to when I joined Chthonic." And regarding Behemoth, he says, "I was stunned when I saw them onstage. They totally blew me away."

Jess Liu, your iPod is showing:

Cradle of Filth -- 'Cemetary and Sundown'

Killswitch Engage -- 'This Is Absolution'

Rage Against the Machine -- 'Darkness'

Black Dahlia Murder -- 'What a Horrible Night to Have a Curse'

Pantera -- 'The Art of Shredding'

My Chemical Romance -- 'I Don't Love You'

Avavtasia -- 'What Kind of Love' Steel Panther -- 'The Shocker'