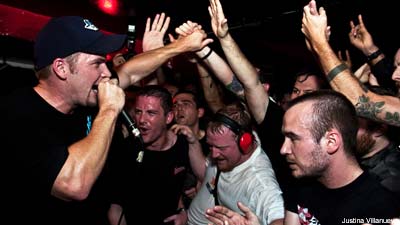 Burnt by the Sun frontman Mike Olender is a true Jersey boy. On Oct. 2, the metallic hardcore band's last American show ever, he admitted that his first hardcore show was at the Jersey shore 20 years ago. Visions of Disorder was mentioned in his long last of bands included on that bill.

"Turn off the heat" someone shouted. The Cakeshop, a small basement located in Manhattan's swanky lower east side, was a sauna filled with a medley of big hardcore lovers' sweat. Being the band's only farewell show in the States, it was also a hometown show that included many of their close friend and family members. Bassist Teddy Patterson's father, wife and son were closest to the stage. Patterson's father -- whom Olender mentioned during their set was always supportive of Patterson -- kept bringing the band cups of cold water in between their songs.

"Don't f---ing stop," someone kept shouting. "Hey! We're old. Give us a f---ing break!" Olender said, as his bandmates were tuning their guitars. At 34 years old, Olender is the youngest one in the band.

The highlight of the show came when Aaron Nichols (ex-Kalibas, Defeatist) cannoned through a wall of photographers surrounding the stage. He went straight for a hug from behind to Patterson. A couple of people just thought he was a random crazy fan, because they tried to pull him away. Then he joined the rest of the pushing crowd. Impressively, Nichols kept his glasses on the whole time.

By the end of their set, people were covered in sweat that didn't come from their own bodies. Drummer Dave Witte jogged up the stairs to get some fresh New York air. Well, as fresh as it can be in the congested city, at least.

Brooklyn Vegan and 1,000 Knives set up the special one-time show that also included Torchbearer, Bloodhorse, Tombs and Black Anvil. The previous week, they put together a secret show with New Jersey hardcore vets Rorschach the Charleston at a small basement venue in Brooklyn.