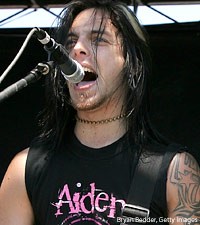 The Bullet for My Valentine tour will mark their first time in North America since the 2009 Rockstar Energy Mayhem Festival. Bullet for My Valentine will be touring for their third full-length album, 'Fever,' which comes out April 27. The album features the single 'Your Betrayal,' which was the #1 most added track at alternative radio.

'Fever' was produced by Don Gilmore (Linkin Park, Good Charlotte) and recorded in Wales and Los Angeles. The disc is the follow-up to Bullet For My Valentine's 2008 album 'Scream Aim Fire,' which debuted at #4 on the 'Billboard' album chart and sold a million copies worldwide.

Bullet For My Valentine recently shot two videos for the new album.

Chiodos have been working on their third album, their first since frontman Craig Owens was fired from the band in September 2009. The group plans to officially announce his replacement at the Bamboozle Festival in Anaheim, Calif. on March 27, however Alternative Press reported that Yesterday's Rising singer Brandon Bolmer will be the new Chiodos frontman. Also appearing with the band for the first time will be drummer Tanner Wayne (ex-Undermined, Scary Kids Scaring Kids). Machine (Lamb of God, Every Time I Die) has been slated to produce the yet-untitled record.

Airbourne will drop their second album, 'No Guts. No Glory,' on April 20. The disc was produced by Johnny K (Disturbed, Sevendust) at his Groovemaster Recording Studios in Chicago.

Bullet for My Valentine Dates with Chiodos and Airbourne

Download Bullet for My Valentine
Filed Under: Airbourne, bullet for my valentine, BulletForMyValentine, chiodos
Categories: News, Tours
Comments
Leave A Comment
Back To Top