AxeWound is the latest metal supergroup to emerge on the scene and as their new album, Vultures, proves, they set out to not just bang some heads, but have some fun.

The band features guitarist/vocalist Matt Tuck of Bullet for My Valentine and lead vocalist from Liam Cormier of the Cancer Bats, along with drummer Jason Bowld of Pitchshifter, guitarist Mike Kingswood of Glamour of the Kill and ex-Rise to Remain bassist Joe Coput.

If you like Slayer, Sepultura and other thrashed-out metall, you'll love AxeWound. As Cormier explained to Noisecreep, it may have been a shift in gears for the boys, but they were up than up to the challenge.

Liam, this record is a great listen. Was as it as much fun it seems to have made this record?

Definitely. That was the main thing going into it. When Matt played me the songs he said, 'This is going to be super fun, super heavy, and kind of something that I don't do with Bullet. And I'm sure you don't do with Cancer Bats.' So that's kind of how we approached it in the studio – kind of the opposite of what we do with our bands – but not being too serious about it and still making it riff.

How did you approach the writing?

When it came to like the theme lyrically, I wanted to cover all those bases of things I really like. Fun songs about Satan, you know, try to be as evil as possible, but also try and be political and cover all the fun bases when you think about old school metal.

What kind of metal fan were you growing up?

I actually got into metal more through hardcore. I grew up more with punk. As I got older, people would say, you need to check out Obituary, and All Out War and all these other bands. Talking to Matt, while recording, I told him that a lot of this stuff reminded me of mid-'90s hardcore, and he was like, oh, I loved Strife. I saw them open for Sepultura. So we were right on the same page.

Was it fun to work with Matt?

It was rad because we knew each other from touring, but I stayed at his house for a whole week during this project so I saw a much different side of him, the bro side, doing this record. On tour everyone is hanging out, but for this we really learned a lot about each other just by working hard.

So how does this band fit in the other bands?

With this project, Matt was saying that this should not come before Cancer Bats because he couldn't have it come before Bullet. But the more we worked, the more we realized that we wanted to make this really work on some level; it was just too much fun. So at festivals, we'd be doing double duty doing sets for both bands and it's been great – exhausting, but great.

The response has been awesome. Cancer Bat fans are really rad so they totally got it. But now we have Bullet fans checking us out and vice versa. Both bands are helping each other. We love the Bullet fans. They're very cool.

Was there a show that really got you into music, metal, punk or otherwise?

I saw Rancid and Rocket From the Crypt when I was like 15. I was living in Nashville and it was just people losing their minds. I was like oh my god – I'm gonna be punk for life! And these were not kids bands – they were a bunch of badass adults. I loved that. Nashville has a good punk scene. I lived there a couple of years in high school – it's where I got into the crustier side of punk. There was a really great scene down there. But I also saw GWAR down there and some other weird metal because a friend had radio show at Vanderbilt University. 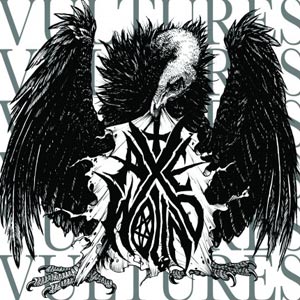 AxeWound's debut album, Vultures, is out now via Search and Destroy and available on iTunes and Amazon.