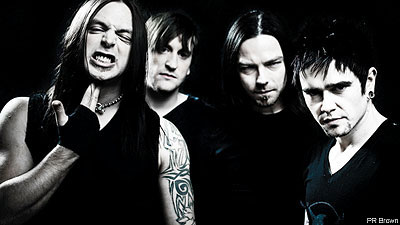 Sometimes, bringing up childhood when talking to musicians is like walking a tightrope. Some have famously said they never want to speak of their youth in interviews. Others embrace the memories, yet tell horror stories of lives past. Then there are those souls who had a seemingly normal upbringing and are afraid to share childhood memories for fear of destroying the ever-important 'metal cred.' Bullet for My Valentine frontman Matt Tuck doesn't fall into any of those categories. Talk to the man for five minutes and you know you're speaking with someone who has been taught manners. Mention those manners and you get an interesting response.

"It's weird that people have this mentality that if you're into metal, that's all you can be into and you have to wear it on your f---ing shoulders and be metal constantly. I mean, that's not cool. I'm a human being the same as everyone else. I like things, I don't like things. But that's just who I am and I'm not afraid to be polite and to say I had a f---ing great childhood and I have a great life. It doesn't mean I can't write f---ing heavy music!" exclaimed Tuck to Noisecreep.

If the last part of that statement seems a little tense, it's for good reason. Tuck says he's sick of the stereotype that all metal musicians must come from abusive homes and be giant, "grizzly, hard men who get into fights and snort cocaine."

For Tuck, not having a so-called 'hard life' doesn't mean he can't explore painful themes and experiences through his music. In fact, it's quite the opposite. So while he might be screaming about fast women, inner demons and suicide on stage, speak to Tuck politely after the gig and you've likely made a new friend.

"I just like to speak to people how I'd like them to speak to me. I'm just a very kind of chilled-up guy. But I like to be in a metal band and it kind of works."

Bullet for My Valentine will release 'Fever' April 27 via Jive.

Download Bullet for My Valentine Songs
Filed Under: bullet for my valentine, BulletForMyValentine
Categories: Interviews
Comments
Leave A Comment
Back To Top