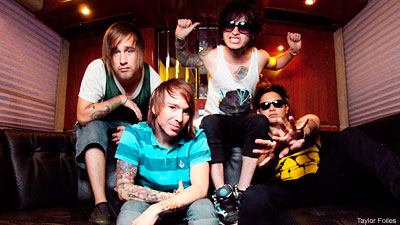 According to brokeNCYDE vocalist Mikl – the one who uses the auto-tuner and sings the clean vocal parts- "crunkcore" is defined as "the blending of top 40 rap with screamo. But basically, it's about getting crazy, having fun and bringing the dance party that's in the nightclubs, to the kids."

With so many artists and music journalists taking shots at brokeNCYDE's music, Mikl was diplomatic regarding the criticisms, which are rather brutal, telling Noisecreep,"The genre is serious. Kids are having the time of their lives at our shows and get pumped listening to our music! Our music is about having fun and getting crunk with your friends, just like Lil' Jon, Flo Rida, Jamie Foxx and Lil' Wayne make songs for adults to have fun and dance to! Our music isn't for everyone's tastes and we respect that. I think that most of the comments come from people that are jealous of the love we receive from our fans, especially on this summer's Vans Warped Tour."

Other band's dissing brokeNCYDE doesn't phase the band in the slightest. Just check the title of their latest album, 'I'm Not a Fan But the Kids Like It' for a taste of the band's self-depreacting humor. "Gotta love the attention, right?" Mikl said, adopting the "all press is good press" philosophy about the times they've been dissed. "We know that not everyone is going to love our music and that's fine. We make music for ourselves and our fans. Sure, there are people who don't like us, but there are a ton of people who love our band and our music."

The term "crunckcore" was a bit of fluke, coined by the band via their manager. "I was talking with my manager, Jared, about how we have started a new genre and no one knows how to classify brokeNCYDE," Mikl recalled. "He suggested that we have to come up with the genre ourselves and has to have the word 'crunk' in it. Half-jokingly, I said 'Let's call it 'crunkcore'' and Jared took it from there and started using it in everyday language. He told our publicist that we invented a genre and it took off from there!" In this case, word of mouth sure is viral among the kids!