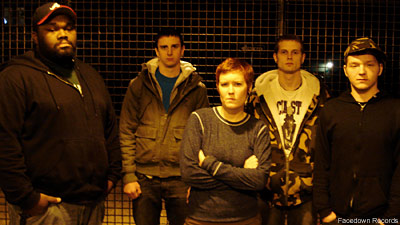 Michigan metal band Bloodlined Calligraphy have made the very sad announcement on April 21 that their bassist, Eric Cargile, passed away in his sleep from unknown causes on April 20. Cargile was 30 years old.

"We don't know how this happened, all we do know is that a loss of this magnitude cannot be truly explained in words," the band writes in a statement posted to their MySpace page. "Eric was seriously the heart of this band, and more importantly, he was the best friend and person we have ever met. Without him, so many things would have never been possible, and we all have so many amazing memories of and with him. We have lost our brother, our best friend, and things will never be close to the same without him. Any of you, bands, friends, fans who had the pleasure of meeting this extraordinary man can attest to the genuine nature of his heart."

Bloodlined Calligraphy will be planning a benefit show to try and raise money to cover funeral expenses. More information on that event will be announced soon. The band will also be establishing a PayPal account for those who want to donate to the cause. "It would be immensely and indescribably appreciated," the band says.

Bloodlined Calligraphy's most recent album, 'Ypsilanti,' was released back in 2006 through Facedown Records.