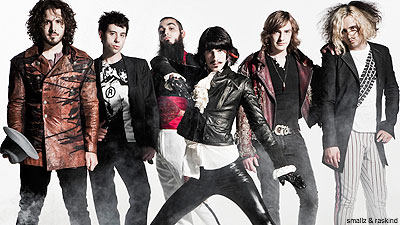 Foxy Shazam got their start on a Ferret Music imprint, a decidedly boutique label that built its hard-earned reputation on the backs of metalcore bands. While Foxy Shazam aren't classifiable as metal, they do have fans in that world and cross over a wee bit. Now signed with Sire for their self-titled debut, vocalist Eric Nally offered up his top six most nfluential metal albums. It's a list we endorse, for sure. He's got good taste, and it's interesting to see metal from the eyes of a none-too-metaller.

"I went to see this band about nine times when I was a kid. I would go to their concerts alone. I remember they were so loud at one concert that they blew out the PA and the crowd had to wait around for an hour for them to fix it." That's certainly metal.

"Anything from them is awesome, because they're really bizarre and I never really understand them. I like things I can't understand. Plus they play with fire and any band that plays with fire is metal to me."

"I like this band a lot because 'Broke' is just an amazing record and every song is awesome. To this day they're still doing what they do even though times have changed. I respect that." We have to agree; it's one of the best rap metal albums of the '00s, a decade teaming with crap -- oops -- rap metal.

"When I got into Slipknot, I started tracing their roots, and that's when I found Pantera. I think Pantera was a big influence on Slipknot; you can really hear it in their music. I feel like Pantera paved the way for a lot of bands who became extremely significant in the metal genre." A modern classic, a staple of the metal cannon, indeed.

"Out of all the records I've listed, this one is probably the one that left the biggest impression on me. I like how obscure Marilyn Manson is but he still managed to become a mainstream artist. That's something I aspire to do with my career." We wish Foxy Shazam best of luck in achieving that goal!