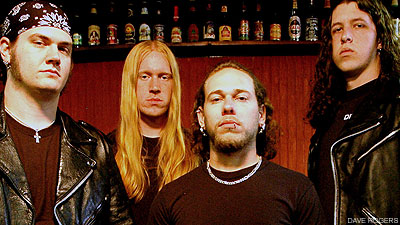 Blatant Disarray guitarist/vocalist Mike Schaeffer has already expressed his feelings about the current thrash metal revival to Noisecreep. In an interview last month, we asked the North Carolina musician if he felt his band was part of that scene, and he defiantly told us, "We have been playing this type of music long before there was any type of 'revival.'" That bold spirit colors Blatant Disarray's new album, 'Everyone Dies Alone.' Songs like 'Faithless' and 'Down & Out' are brimming with melodic vocal lines and the kinds of guitar and bass riffs that will turn even the most stubborn old-school thrash aficionado into a believer.

For this Noisecreep exclusive, we are proud to premiere the official video for Blatant Dissaray's track 'Undetermined.' "We were going for a very raw, in your face type of video," said director Blake Faucette. "We had limited resources, so we chose to focus on hot shots of the band, guitars and drums. We brought along our Canon 7Ds, set up in their practice space, drank a bunch of beer and just had a great time filming and hanging out with the band."


The less is more approach even appealed to Schaeffer. The outspoken frontman told Noisecreep, "It was great to work with a director who knew what they wanted and how to get it." We asked him what the song was about, and he responded, saying, "It's about a time of unrest personally and professionally for me. The title 'Undetermined' basically sums up what I was thinking about in regards to my future and the fact that sometimes other people play a large role in your life -- whether you want them to or not."