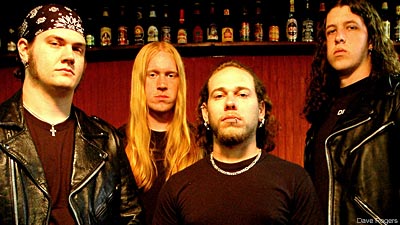 Blatant Disarray make no bones about their love for late '80s metal. The North Carolina combo just released 'Everyone Dies Alone,' their debut album for Tribunal Records, and it recalls the heyday of Bay Area thrash. But that doesn't mean they are mere revivalists. The songs on 'Everyone Dies Alone' show that Blatant Disarray understand that songwriting, not gimmicks, gives a band a career. The opening cut, 'Undetermined,' sets the tone for the rest of the record, with its frenetic riffing, airtight bass drum work and hooky vocal melodies.

Vocalist-guitarist Mike Shaefer's deep vocal tone will remind you of Testament's Chuck Billy in parts, and it suits the group's big choruses. Noisecreep had to get Shaefer on the phone to get more information on Blatant Disarray and their devotion to old-school thrash metal.

You guys are in your 20s, but the songs on 'Everyone Dies Alone' sound like they were written circa 1988. What about that era is so appealing to you musically?

To put it simply, we just love to play fast. I don't think we ever set out to be a thrash metal band it is just what came out of us. In some respects, playing thrash metal is like riding a bike -- the faster you go, the more fun it is!

Are there any newer bands that you are listening to these days?

Well, I think we all have a somewhat different taste in music as far as what we listen to at home. If I had to name a few bands that we all dig, they would be Opeth, if you want to call them new. Let's see, oh yeah, Between the Buried and Me and Mastodon are also bands we can all agree on.

Does the band feel like part of the thrash metal revival of the past few years? You certainly don't have the gimmicky feel that some of those bands have.

Absolutely not! We have been playing this type of music long before there was any type of 'revival.' When we first started out, there were a number of people who dug what we were doing, but the whole bounce metal thing was going on around then, and we just did not fit in with that type of crowd. It was very challenging to find bands to play with that shared our style. This forced us to play with groups that you wouldn't normally see a thrash metal band playing with. In hindsight, this was probably the catalyst to expanding our fan base as we were exposing our brand of metal to people that would not normally go out to our type of show.

We were very surprised to see some more thrashy bands such as Avenged Sevenfold and Trivium beginning to get major airplay in recent years, but we are definitely not trying to follow any sort of musical movement. We simply do what we do, and have never changed our sound to fit into any sort of scene.

You've played hundreds of shows already, but you just got around to releasing your debut album. What took you so long?

That is a loaded question. Some say it was a curse, some say bad luck, some say it was perfectionism. I believe it was probably all of those combined. We first set out to record our debut full-length around four years ago. We were plagued with just a ton of setbacks. We had a producer that basically hijacked our album, we had a recording engineer that royally screwed up the tracking to the point that we had to re-record, we went broke and the list just goes on. I think this ultimately worked out to our benefit though as this album represents a fairly long period of time in all of our lives. There is a song that is over five years old as well as a song that was written the day before we tracked the final drums. I think the album shows a progression of sound to the point we are at now, and the next album will only continue that progression.

Matt from Tribunal Records has been a big champion of the band.

Matt has been great to work with! He has been very supportive of our music right from the start. What I am most thankful for is that he saw the potential of this album and did everything he could to assure it sounded as good as possible and got the proper release. He's got a great label with a pretty sick roster, we couldn't be happier.

John Custer produced 'Everyone Dies Alone' and Noisecreep readers might know him from his work with Corrosion of Conformity. What was that experience like?

It was fantastic. We are all big COC fans and had met Custer through a mutual friend years back. When it came time to find someone to lend an ear to the project, we thought why not go with the best around. A couple of members of the band are really into the whole producing and engineering thing and work with some local bands around the area, our work with Custer was beneficial in that aspect as well. It's always great to learn tips and tricks from a seasoned veteran.

Lyrically speaking, what kinds of themes do you tackle on the album?

Well, because of the amount of time that these songs span there are a variety of issues throughout the entire album. A lot of it comes from personal experiences that have either pissed me off or inspired me. There are others that speak of my trying to understand how the world works, why it works that way, and what I could do to make it better. There are some deep seeded political tones throughout but I really have always tried to stay away from sounding like I am preaching my views, maybe just presenting questions.

This year we would really like to hit the road and play for as many people as we can. It has become increasingly hard to do that these days unless supporting a national act, so we are trying to do it as intelligently and effectively as possible. We would also like to start tracking another album towards the end of this year. With the amount of time that it took 'Everyone Dies Alone' to come out, we are a bit backlogged with songs that definitely represent a progression of our sound, and we look forward to sharing them. We already have some great new songs in the works. Therefore, the next album will hopefully be completed relatively quickly.

Since you are an authority, what are your favorite all-time thrash metal albums?

Testament -- 'Practice What You Preach'

At the Gates -- 'Slaughter of the Soul'