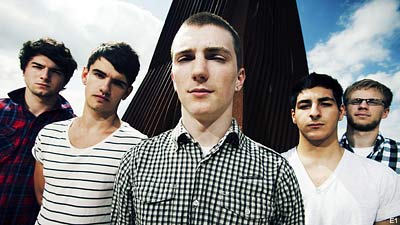 "Blackhole are all about playing heavy rock 'n' roll and just enjoying what we make. We're only in this for us," frontman Richard Carter told Noisecreep. Those are certainly noble endeavors for an aspiring rock star to pursue. But some uninformed blokes might assume that Blackhole are going to live in the shadow of Gallows, the spit 'n' venom soaked (and absolutely bloody and buzzing) U.K. punk band that features Carter's brothers, vocalist Frank and guitarist Steph!

Carter doesn't think the blood relation to Gallows will get in the way, though! Blackhole certainly aren't Gallows Jr. Instead, Blackhole rip and snort in a crunchier, nastier and slightly more metallic way. "I don't know if we are like them," he said. "It's a hard one for me, because my brothers have helped me and Blackhole a lot and we appreciate everything they've done for us. But people don't seem to realize we're two completely different bands. Yeah, my brothers are in Gallows -- that doesn't mean we're a little version of them though!"

Blackole won't be spreading their seed on U.S. soil anytime in the very near future, but touring here is eventually in the cards for the band, since the U.S. is a market they'd like to conquer! "Hopefully at the start of next year we'll start looking at some tours to do, we'd love to tour the U.S.," Carter said.

Since Blackhole are so new, they don't have to worry about the whole curse and conundrum of what's big in Britian is not always what ends up translating in the across the pond. "We hope our music translates quite well, but we're not huge here anywhere anyway, so we don't have high expectations," Carter said, indicating he has a good, realistic head on his shoulders. "If enough people like what we do and we're able to come over and tour then we will!"

Blackhole are newly signed to E1 and their debut is out now.