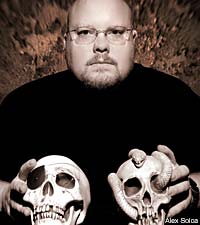 One of the most popular features in music editorial is 'the list.' However, year-end, best-of lists are often the most anticipated and most argued elements of music journalism. Everyone looks forward to compiling their top 10 records of the year as much as they look forward to checking out and discussing the lists of others. It's an enduring trend that is in every magazine and on every blog, that's for sure.

In the spirit of such an endeavor, we asked Metal Blade president and founder Brian Slagel for his favorite records of the year so far. "The Grand Magus album, 'Iron Will' is one of my favorites," Slagel told Noisecreep. "I am obsessed with it. I love it." The album is out via Rise Above Records, which actually has a distribution deal with Metal Blade. "The new Killswitch Engage album is amazing and I am a big fan of them and have been for a while. I also like the new Gallows record, 'Grey Britain.' It's not metal, but it's good," Slagel also said.

Sure, it would be easy for Slagel to say that all Metal Blade albums are his favorites. And no one could accuse of him of nepotism, since he tends to put out music that he loves. He said, "I love a lot of Metal Blade releases, but I am too close to them, so those are the two records I am into that aren't Metal Blade records!"