Sludge merchants Black Tusk and Dead Yet? recently released a split where they had a little fun. They covered each other's songs" Black Tusk covered "Fearing Your Mind" while Dead Yet? covered "Facedriver."

Noisecreep caught up with Black Tusk drummer James May to talk about the release and the culture of underground covers, as well as what else his Savannah, Georgia-based trio has on the docket.

On your split with Dead Yet?, you cover one of their songs and they cover one of yours. How very cyclical of you! How did you choose? Did you offer one another any input? How did you feel about the result of your cover? How did they feel about yours or do you not know?

We chose the one we thought Black Tusk would be able to pull off the best. We all kinda had our own ideas on a few, but in the end, that ended up being a universal pick. I think the cover turned out great. Jeremy Hush is an old friend of ours from Savannah and we felt he was the right artist for the job. Dead Yet? actually plays the song we did the way we do it now.....it's pretty funny.

Covers and splits like this, delivered via small labels, still have an audience and a cult following, even though the traditional musical business model has changed so drastically. Why do you think this underground culture exists and thrives?

I think it has a lot to do with keeping things pure and underground without it getting watered down. In some ways, bigger labels are great, but for something like this, smaller was the way to go. People like having something hard to find and you keep a connection with the way you even got started in the first place.

What else is on the docket for Black Tusk in 2013?

More touring! Also, a release coming out in July, so be looking for it.

Do you have any non-music skills or hobbies or talents?

I like to draw in my free time. I draw on drum heads when we're on tour.

Can you share a recording story from this split?

I got a ticket for not wearing my seat belt on the way to the music store. 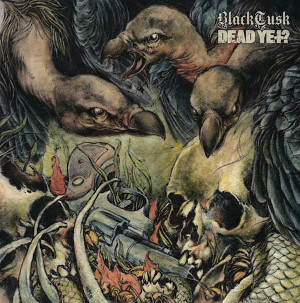 The Black Tusk / Dead Yet? split EP is available now via Hyperrealist.