Black Sabbath have dropped the new single "God Is Dead?" from their upcoming album 13, which is out June 11 and is the band's first album in 35 years. It sounds like the slow, deep and hard Sabbath of old, launched by a heavier-than-granite Tony Iommi riff that crawls through the intro before Ozzy Osbourne checks in with his signature nasally vocal.

It's all doom and gloom, and that's just how we like it. When the Blizzard of Ozz sings, "With God and Satan at my side / From darkness will come light," it demonstrates the nature of the song and of Sabbath. He admits he doesn't believe God is dead, which certainly makes the song one to ponder lyrically while banging your head so furiously that you might kill a few brain cells.

There's an ominous-ness that is distinctly Sabbathian that course's through the song's veins. It's eight minutes in length, making it a mini epic. There's a bluesy mid-section where Iommi and crew are allowed to jam with their instruments to create a pocket of metallic sound from which you cannot escape.

Despite the inquisitive title and its punctuation, there's no questions here. The song is decidedly Sabbath, a haunting and heavy track, thanks to the sludge and thud created but Iommi. Remember, this is a man who is currently being treated for lymphoma. You'd never know it from his playing. If you've not yet bowed down, there's no time like the present.

The bottom-heavy thud anchors the song and recurs throughout, which is perhaps why it's so memorable.

"God Is Dead?" is available digitally as of tomorrow, April 19.

Listen to 'God Is Dead?'

CLICK HERE TO LISTEN IF YOU'RE ON A MOBILE DEVICE 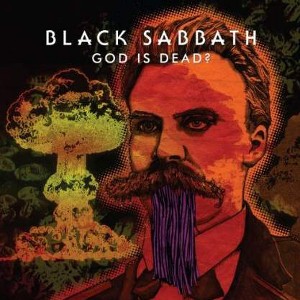