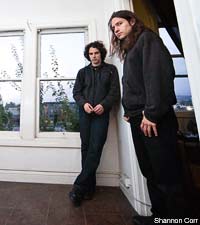 The two-piece band concept seems to be gaining in popularity as of late, perhaps due to the success of such blues-based duos as the White Stripes and the Black Keys. In the heavy music realm, bands like Om and Eagle Twin typically rely on bass-heavy droning to make it work.

Such is not the case with San Francisco duo Black Cobra, where fast, metallic riffs are delivered with a punk rock intensity that is undeniably thick and heavy ... so much so, you will likely forget all this noise is being made by just two guys. Black Cobra intend to keep it that way.

"We prefer being a two-piece," drummer Rafael Martinez told Noisecreep. "It took us a long time to develop our sound. We tried different combinations of amps, pedals, tunings ... just trying to make sure we captured the sonic spectrum of a full band. We ended up using a combination of one bass amp and one guitar full stack. In the studio we try to recreate our live sound as close as possible. Sometimes there are guitar layers in the studio but we try to keep it quite minimal."

While a "minimal" approach may have been taken in the recording of their third full-length release, 'Chronomega,' the sound is anything but. It might make you question why bass players are necessary at all. In fact, it might even make you question, uh ... time travel?

"We were originally thinking of doing a theme concerning the consequences and possibilities of time travel." Martinez said, explaining the album title. "Chrono' referring to time, and 'mega' to the expansion of how we experience time in the third dimension and being able to manipulate it through the way we perceive it."

Pretty complex stuff for such a minimal band. Whether musically or conceptually, Black Cobra seem intent on pushing the limits of what is possible for both the band itself and the listener. So where do they look for such savvy inspiration?

"We both like film a lot," explained Martinez. "Black Cobra has been greatly influenced by cinema. Not just soundtracks, but the art of film itself. We have found that the conception, production and execution of film creation is an art form that has similar parallels to creating albums."

Black Cobra is on tour now. 'Chronomega' will be available Sept. 29 via Southern Lord.