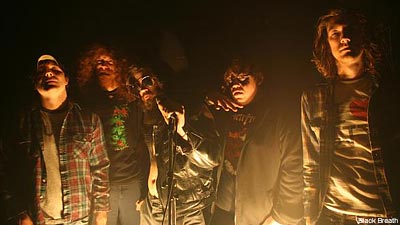 When Black Breath signed to Southern Lord, they copped to being birthed from dark, dank places like basements and dive bars in Bellingham, Wash. Even though the band has since relocated to Seattle, drummer Jamie Byrum was quick to suggest his fave cheap watering hole in his former digs. So if you're on a road trip and passing through Bellingham, be sure and hit up the Waterfront Tavern.

"The Waterfront Tavern in Bellingham is a seedy dive right on Bellingham Bay that's been around forever," Byrum told Noisecreep. "Some of its past clientele include Ted Bundy, [Hillside Strangler] Kenneth Bianchi and John Muhammad, the D.C. sniper, who applied for the same job our singer Neil had as a line cook, as well as other homicidal locals and scumbags."

It's true that the Pacific Northwest was a breeding ground for some of the country's most prolific and violent serial killers. Thank God Black Breath took up the rock as their pursuit!

Southern Lord will release the band's 'Razor to Oblivion' EP on Nov. 10, and a full-length is expected in 2010. "If you're into metallic punk music and you like to headbang, check out the EP," Byrum said. "It's a good primer for the full-length which is much darker, faster and way heavier. If you like splitting headaches and hearing loss, come to the gig for a good rock and roll show."