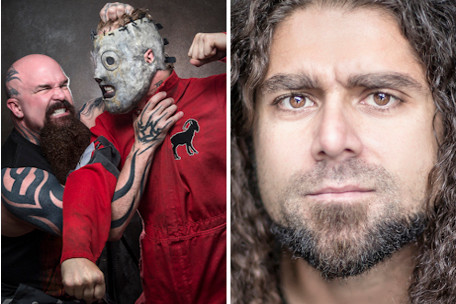 After wrapping up a hectic fall season of photo shoots with Megadeth, Motionless in White, Epica, Kamelot, Coheed and Cambria, GWAR and many others, Jeremy Safferis taking a moment to look back at 2012 with Noisecreep.The Massachusetts-based photographer had a fantastic 2012, working with some of his favorite musical and cinematic heroes. If that weren't already enough, Saffer is hard at work on a book and has been giving seminars, sharing his wisdom with photographers. You'll be able to check out more of his stunning work in upcoming issues of Alternative Press, Revolver, and Outburn, plus folks in Los Angeles should stayed tuned to Noisecreep for detailed announcements for Saffer's next seminar there in February.

Today, Saffer is partnering with Noisecreep to present to you his 20 favorite images from his various photo shoots of 2012. As a bonus, Saffer is giving away a ton of cool stuff to some lucky readers. Check out the photo gallery and the simple entry rules below!

TWITTER CONTEST: Head to Twitter and send @noisecreep and @jeremysaffer a tweet telling us which of the photos in Jeremy's top 20 list was your favorite and why. The prize list is below. Make sure you include the #saffer hashtag when you enter. We'll pick the most creative entry and Jeremy Saffer will announce the winners on Dec. 10 on his Twitter account.

FACEBOOK CONTEST: Share this story on Facebook and in the comments tag @noisecreep and @jeremysafferphotography tell us which of the photos in Jeremy's top 20 list was your favorite and why. We'll pick the most creative entry and Jeremy Saffer will announce the winners on Dec. 10 on his official Facebook page.