Richie Cavalera – that last name should be instantly familiar to any self-respecting metalhead. He is the stepson of Sepultura and Soulfly guru Max Cavalera. So he certainly had a front and center seat for his metal education, learning from a legend.

Noisecreep spoke to Cavalera about his band Incite and their new album All Out War and what he learned from a man who helped put extreme metal on the map!

First, let's establish why metal fans would dig Incite. I already know why. But why don't you tell 'em too?

So you are Max Cavalera's stepson...

I am technically Max's stepson but he has been dad since I was five-years-old.

We can't all have super cool metal dads like you, so we have to ask. You must have learned a lot from him, right?

Immensely. Without him, I wouldn't have the opportunity to go in front of huge crowds. I was six or seven and he took me on stage with Sepultura. He influenced me with his stage presence and with the confidence that he has on stage. I am a fan of all his projects, so that creeps into my music a little.

So it's just influence that he imparts on your career?

Yes. He doesn't help us write or songs or get record deals. He takes us on tour and then we're on our own, which is what we want. It's taught us hard work and the value of what we've been given.

You're not getting any sort of free ride or dealing with any nepotism!

No way. We are like so many other bands out there. This is what we all dream of every night, this guides us.

Tell our fans what song we should check out on All Out War first.

'Exposed' wasn't going to be on the album. [Drummer] Zak [Soflay] came up with a cool chorus that set the album and the song up. At first, we were not sure about the song. When one of the guys has a good feeling, we all tend to ride with it and he pulled through on it. We might not have had it on the record. Now, it is one of my favorites. It always takes someone slapping you in the face to realize a song is good.

Do you have any non-music skills or hobbies?

When home, I go and play golf a lot. That is my weird thing. When you come home from tour, it's like you've been through a war, on the road, and then you get to this peaceful environment, smoke a joint, drink a beer, and for me, enjoy beauty of Arizona. I also love gambling, unfortunately.

It's just poker. I need something to replace the adrenaline jolt that the stage gives. Really, nothing comes close. But you play poker and it gets a similar emotion going.

Obviously, it's not high-stakes poker!

No, I am playing little games. I work too hard for the money that I make and I don't want to loose it.

Another crazy year and I'm excited for it. We have a U.S. tour coming February going through Canada and America. We might get of Australia and Southeast Asia, and wrap up in summer. That will be our first time doing Europe and festivals. It is the mecca for music.

You mention that coming back from a tour is like coming home from a war. Give us a war story or a war tale!

We did 30 shows and covered 10,000 miles in my two-door sedan, with all four guys in the car. Do that and you can understand what music is all about.

No way, dude. That sounds like pure hell. What kind of car made that trek?

It was a Toyota Solara, which is made for a wife and a husband and that's it. Not four guys. One thing that is cool about this band is we don't fight. We all see eye-to-eye. When we get home, we don't call each other. So when we see each other, and hit the road, we are super stoked and it brings a new vibe every time.

Anything you want to tell fans?

I sell the merch at shows, and people can see how down to earth Incite is, and how chill we are. We're not four assholes who think we are the shit. We want people to enjoy it. Come talk to us. 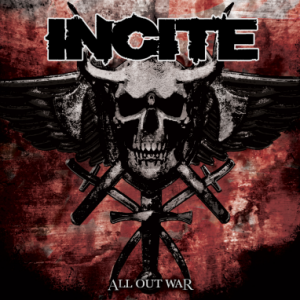 Incite's sophomore album, All Out War, is out now via Minus Head Records and available on iTunes and Amazon.