Ex-Evergreen Terrace guitarist Josh James has joined Orange County, Calif. hardcore heroes Stick to Your Guns after becoming increasingly unhappy with the band he poured a decade-plus of his life into. He also ended his Casey Jones project, so it was a time of enormous change for the musician.

Noisecreep spoke to James and singer Jesse Barnett, about the new look Stick to Your Guns, and how the guitarist is acclimating to the change.

Josh, how was it getting used to a new band after so many years in Evergreen Terrace?

Josh: 2011 was a strange year for me. I was very unhappy with the band I had put all of my energy in for the last 12 years, Evergreen Terrace. There was so much negativity involved in it the last few years that it just drained me. I just wasn't having fun anymore, and it felt pointless. At the same time, I decided to end Casey Jones, a side project that had always been really fun for me. The future was really unclear. I thought about starting a new band or possibly taking a break from music for a little while until I felt inspired again. I got a call asking if I was interested in playing guitar for STYG. I had been friends with them for years through touring. Once I heard some of the new songs and read the lyrical content, I was hooked. Not only was I stoked to play music again, but I was fully inspired in every way possible. Sometimes you just know when something is right, and I knew it 100 percent. I get to hang out with my best friends every day on tour. Stick to Your Guns is where I belong.

Do you ever feel stress or anxiety over the fact that the kids so much pay attention the socially conscious part of your music? It's like you have to pick and choose your words carefully and mind your Ps and Qs, since they are so focused on it.

Jesse: I definitely do feel stress from time to time about how close people look into or listen to our music. Almost everything I do in my music and in my life is based off of how I feel, my feelings and the things that I see in the world. So with that being said, it's inevitable that social issues will bleed into our music.

We are very outspoken about certain things- from homophobia to spousal abuse to religious fascism. However, this can offend some. Not everyone's views in the world can align. That's the part that I get bummed about.

They can choose to ignore the message and still enjoy the medium in which it's delivered.

Jesse: I never want someone to feel offended by our music, but in the end these are things that I believe in, and we really are trying to spread a message that is both positive and perhaps eye opening to a younger, more open-minded audience. The people who are next in line to write laws, start companies and raise families. We just want everyone to be okay. We want everyone to accept each other for who they are, whether you agree with it or not. Maybe instead of force-feeding a way of living down someone's throat, you can lead by example. That's what we try to do. When a fan, a word I despise using, says something like "Your music has restored a faith in humanity that I thought was gone forever' or 'Your music has helped me get through all of my tough times' or 'I now volunteer at a shelter and do charity work because of your music' - all of those things are so overwhelming to all of us. These people who I know nothing about have allowed us to play a major role in their lives and have allowed us to change the direction of their lives. To me that is the best part of all of this.

You have your Keeping Warm in a Cold World charity event, with the proceeds for this year's event going towards late Suicide Silence singer Mitch Lucker's daughter Kennadee. Can you share a little more about this event as a whole and specifically your choice of donation for this year?

Jesse: Keeping Warm in a Cold World is a two-day event of shows that we have done every year for the last 3 years to raise money for different charities. The success that we have had has been amazing. The amount of people who come out and support whatever the cause may be is the very essence of what I love about this music. This year the proceeds will go towards Mitch's daughter's education fund. I grew up in Orange County, and I went a lot of shows from a very young age. I always saw Mitch around. I was even there at the beginning of Suicide Silence.

Eventually, I started Stick to Your Guns, and we played some shows together. He became a very good friend and someone who I had looked up as far as being in a band. They took us on tours and always treated us with the utmost respect and kindness. In fact, we were on Mitch's last tour.

At that point I hadn't seen him in about four years because both of our bands were very busy. I didn't really except him to notice me because the tour was packed with a million bands. I was side stage at one of the first shows of the tour, and I feel someone hug me from behind and it was Mitch. He told me how good it was to see me and that he and the rest of the band were very excited to tour with us again. 'Just like old times,' he said. He introduced me to his daughter that night. I was in the Czech Republic when I heard the news of his death. I was shocked. I couldn't believe what I was hearing. Especially because it happened in the city I live in. All of it was just too much. So this year's Keeping Warm benefit will be very personal to me. We will use these shows to remember an amazing person and will play in his honor. Mitch Lucker, rest in peace my friend.

Pick one song on Diamond and share a writing/recording story – something we'd only know because you told us.

Josh: Diamond was recorded at The Blasting Room in Fort Collins, Colo. Some of my favorite bands have recorded there: Propagandhi, Good Riddance, Rise Against. My most memorable moment was meeting Bill Stevenson, the drummer for some of the greatest and most influential punk bands of all time like Black Flag and Descendents. He walked in, took a double take of me and said something like, 'I thought you were Henry (Rollins)!' He was funny as hell and was super pumped recording STYG. He asked us each to make a playlist of bands we thought he'd never heard of. After recording, he let us know his favorites. When Chris and I did our vocal parts on the song 'Empty Heads,' Bill was a ball of energy, making every minute of tracking hilarious. He'd make up words to the song causing us to laugh in the middle of tracking our parts. Definitely an awesome experience. That studio is where I officially joined STYG and lived out a childhood dream.

Jesse: 'Life in a Box' is a song I feel kind of gets overlooked on Diamond, but it's a song I am very passionate about. People have told me that I sound so serious and pissed off on that song, more than on the other tracks on the album. Something that has always drawn me to hardcore music was the sense of community and the INTOLERANCE of INTOLERANCE. When I was younger, we played a show with a band called The Mistake from Orange County. The show was a benefit for Hurricane Katrina. I was very happy to be a part of it.

Some band played, and they said the word 'faggot' from the stage. I'm not sure the context, but I remember it was something along the lines of, 'Come on you faggots! Don't be pussies! Move!' I remember hearing that and thinking, 'Wow I can't believe he just said that out loud and in front of all these people.' It made me feel weird. The Mistake came on next. Before they started their set, their singer went on a rant about how that behavior was disrespectful and how that kind of shit wouldn't tolerated in our scene. He had the entire crowd turn around and flip off that band who was standing in the back of the room. That's when I knew that I belonged in this scene.

For too long Stick to Your Guns has met bands, mostly religious, who spout off their hateful message: If you don't walk the same paths that they walk then you're going to hell. The things being said about homosexuals were becoming too much for me to handle, however I never publicly said anything because I didn't want to start a feud or something like that. It was very cowardly of me. I finally had enough, so I wrote 'Life in a Box' about how it's not wrong to be homosexual and how disgusting it is when people think they are doing something moral by treating them with hateful words, with threats and violence. They think it's ok because of their religious conviction. At the end of the song I say, 'I'm through acting 'civil.'' Now you know how I feel". I just wanted to lay all my cards out on the table. If you think it's wrong to be gay, then you are a part of the problem.

Music is certainly a terrific medium for change and education. STYG seem to really take that to the next level.

Jesse: I grew up with a brother and a sister who listened to a lot of metal, punk and hardcore. It's always been a part of my life. Most of the messages from my favorite bands are ones of peace and self-empowerment...about the battle against injustice. It seemed like the only natural thing for me to do was to follow in those footsteps. Young people are led to believe a lot of stupid things like they need to 'fall in line' or 'calm down' or that their voices and actions aren't powerful enough to create a change. We are simply here to undo all of that brainwashing and tell them that these sad, old people telling them this- that their time is almost up. It will soon be the younger generation's turn to mend all of the homophobia, sexism, racism, fascism and every other hurtful horrible ugly state of mind that is taught from such a young age. We can do things differently. We can do things right.

Josh: I spend a lot of time doing Crossfit. I train a lot while I'm home at Dogtown Crossfit in Culver City, Calif., and I bring a decent amount of equipment with me on tour to stay in shape. It helps me clear my head.

Jesse: I like to skate, read comics and I'm a HUGE dog person. That's about it! 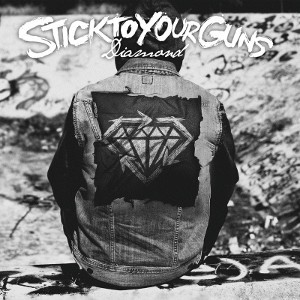 Stick to Your Guns' latest album, Diamond, is out now via Sumerian Records and available on iTunes and Amazon.