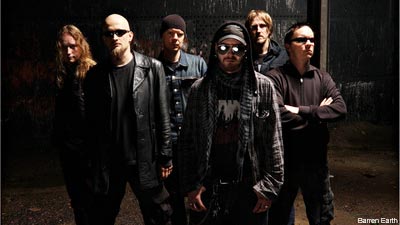 Killer Lyrics: One move to deceive the haven / God forsaken without lucky stars / Soon to breathe but not yet / In silence to endure this / Or our twilight

Much like metal in general, and the recent book and film series dealing with young vampires, Finnish metal band Barren Earth deal with the darker side of things. "The way I see it is that we are a death metal band after all," drummer Mark Tarvonen told Noisecreep. "So we have to sing about dark and depressive things (such as death, depression, madness

etc.), as it serves the music in a best way. It would be quite odd to sing about butterflies or cars on a band like this!"

A new song from the band named -- interestingly enough -- 'Our Twilight' will be heard from their newest release, 'Curse of the Red River' on Peaceville Records.

"'Our Twilight' is an apocalyptic vision of a person's (or the world's in general) inner suffering from the pain one creates to itself everyday," Tarvonen explained. "It's just going worse all the time that the only fine solution would be to just fade away. Nice huh?!"

Barren Earth has show dates scheduled in Finland to support 'Curse of the Red River.'