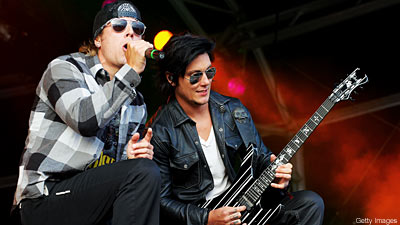 Avenged Sevenfold have a special relationship with their fans. As we told you before, it was those fans that kept the band going following the death last year of drummer Jimmy 'The Rev' Sullivan. What does the Orange County band attribute that bond to? For one thing, it's realness. "I think there's a whole group of kids out there that don't relate to the glitz and glamour of hanging out in clubs and partying all the time," guitarist Zacky Vengeance tells Noisecreep. "So I think some people are just more real than that and I think our fans are those kind of kids that need something to relate to and I think we're the band to do it."

Another thing is making themselves accessible to those fans. "I remember what it felt like when I was young, and I looked up to someone and they would pay me just an ounce of attention," he recalls. "And some of the bands I listened to when I was young probably never even sold any albums, but it didn't matter to me. If I'd go up and say great show, it would be amazing that they even would acknowledge me."

Interestingly, asked if there are any moments that stand out to him of bands paying fans that kind of attention, the first thing that comes to Venegance's mind is not music, but baseball. "What actually really brought it all back to me is I went to a baseball game, I'm a huge baseball fan," he admits. "And I watched the little kids [try] to get a player's autograph from the field, and I looked and I had memories rushing back to me from when I was a little kid standing there waiting forever with a baseball, begging the players to do it. And sometimes when a player would walk over and grab the ball, it was the most exciting thing in the entire world."