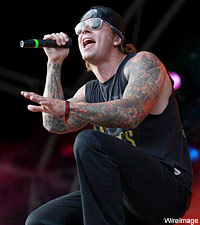 On Saturday, nearly three weeks after the body of his best friend was discovered inside his Huntington Beach, Calif., home, Avenged Sevenfold frontman M. Shadows took to the band's Web site for the first time since the unfortunate task of confirming the death of Avenged's drummer, James 'The Rev' Sullivan, to discuss the kitman's unexpected passing and the future of Avenged overall.

"I don't know how to start this or know where to begin," Shadows begins his pained missive to the fans, whom he thanks for "their support through the passing of Jimmy. It has been comforting to see his fans, our fans, and everyone in general, give their support. Jimmy was my best friend, as he was best friends with many other people, including the members of Avenged Sevenfold. He was hands down the greatest person I have ever known. I told him I loved him every day. He demanded your love and was never afraid to give it back."

Shadows calls The Rev his "best friend, songwriting partner, band mater, confidant, and most importantly, he was my brother." He said he doesn't have memories before Jimmy and realizes it's going to be difficult to move on without him. "This guy was magical. The outpour of art from his soul was unlike the world has ever seen," Shadows writes. "He inspired people in different ways. He wasn't just a drummer; he honestly didn't care so much for the technical side of drums, 'cause he could play anything he wanted. He was all about creating beautiful songs, original fills and hopefully touching people with his art and mind."

Then, in a chilling revelation, Shadows explains that The Rev, for years, has been telling his friends and parents two things: "He wanted to be a rock star, and that he wasn't going to live past 30 years old," the singer writes. "He was right on both counts, but I know Jimmy, and if he knew how much pain this would cause for the ones he left behind, he would have done anything he could to stick around a little longer.

"Jimmy gave so much and in the end, it was his time to go," Shadows continues. "All my reasons for wanting him to stay are selfish and I know he is in a better place than this, so in a way I'm joyful that my best friend is now at peace. He made it to the other side first and I can't wait to hang with him again. I have so much to say but can't find the words, so I will wait until time can allow me to find a way to express myself."

Then Shadows assures fans that a new record was on the way, that for the band, "it has become clear what we need to do." Having written a record already with The Rev, the band has decided it's only right to release it. "I can't promise what the future holds because right now it's too painful to think about, but we know we need to record and put out this record in honor of Jimmy, for Jimmy," Shadows says. "He would call me every night to talk about songs and tell me, 'This s--- is gonna change the world.' I agreed with him. Unfortunately, I didn't know it would be on these terms.

"Please be patient with us for we cannot imagine how hard this is gonna be to get through; we just know we have to do it for his legacy," the singer adds. "After that, who knows? But I know Jimmy will help us make that decision when the time comes."

The official cause of Sullivan's death could not be determined after an initial autopsy was conducted immediately after his body was found on Dec. 28. A battery of tests has been ordered on the remains by the Orange County coroner's office. Once the results of these "toxicology, microscopic and laboratory tests" are returned, they should give officials a clearer picture on what caused the drummer's sudden passing. An official determination should be made within the next month.