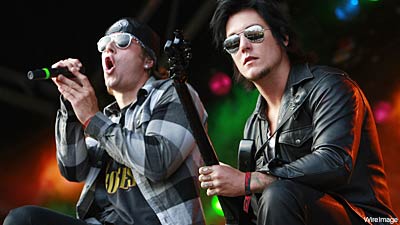 It's been two years since Avenged Sevenfold released their self-titled LP, and four years since they've issued their breakthrough studio set, 2005's 'City of Evil.' Now, the Huntington Beach, Calif., rockers are back in action, working on their next record, which guitarist Zacky Vengeance thinks will be the band's "most personal and epic."

Vengeance says that Avenged were inspired by the world around them for this next record. "We came off of the road amidst one of the most turbulent times in history," he says. "Everything going on around us was overwhelming, frightening, frustrating and confusing. I must confess that it was also very exciting to me. I'm sure you can share my sentiment."

Since getting off tour, the mission has been clear. Write new songs and hit the studio as soon as possible. "We have been focused on only one thing: writing and preparing to record what to me is our most personal and epic Avenged Sevenfold album," he says. "The reason is the fact that everything happening around us in the entire world might be a once-in-a-lifetime source of inspiration and direction."

Vengeance sees it as an exercise in distilling everything around them down to an uncontrollable piece of metal madness. "We have been harnessing every aspect of what makes Avenged truly unrelenting and building off of that. I don't think we sleep too much anymore because of the excitement we feel while writing this album. Only a world spinning out of control could inspire the music and vision we have now. Once again, it is f---ing exciting."

The band will continue fine-tuning the fresh material 'until we feel every note does both you [the fans] as well as us justice," says Vengeance. Avenged Sevenfold is also mulling over producers and engineers for the project, "so that the second the axe falls and the album is written, we will spend day and night in the studio until it is complete. This album will definitely take you on a very dark journey."