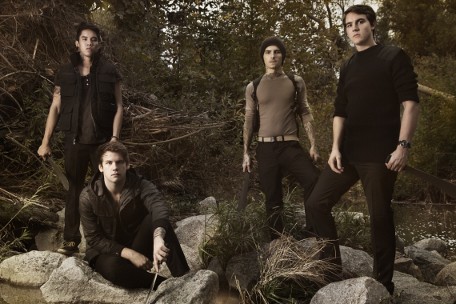 Next week Attack Attack! will release the appropriately titled 'This Means War,' their third studio album. Produced by frontman Caleb Shomo in his home studio, the 10-song collection finds the Ohio metalcore outfit firing on all cylinders, with some of the most relentless guitar assaults found in their discography yet.

Even though the album won't hit stores till next Tuesday, Noisecreep got its hands on the exclusive premiere of 'The Wretched,' the first video from 'This Means War.'

'The Wretched' director Megan Thompson gave Noisecreep some insight on the making of the video:

"It was a great experience working with Attack Attack! on this video. We've been friends for a long time, and it was really fun developing the treatment with them. 'The Wretched' is the first part of a larger story, and represents a call to arms against the frustrations facing a lot of people in today's society.

"The video crew was amazing, from our director of photography; Bryant Jansen, to our production designer; Ben Spiegelman, and our editor; James Fitzpatrick. Early in the day the skies opened up and we had to deal with an intense rain storm, which ended up being such a positive thing for the look of the video. It made for a very rough day of shooting, but I couldn't be happier with the final product."

Attack Attack! will unleash 'This Means War' next Tuesday, Jan. 17, in stores and online via Rise Records. Pre-order exclusive bundles of the album now from the band here: http://attackattack.merchnow.com/.

To help celebrate the new album, Attack Attack! will head out on the This Means War Tour along with The Ghost Inside, Sleeping With Sirens, Chunk! No Captain Chunk!, and Dream on Dreamer. Check out the dates for the American trek below.