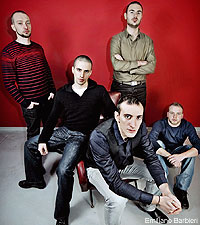 Italian stallions At the Soundawn captured the live performance of the song 'Black Waves' from their latest, 'Shifting,' which came out earlier this week. "The video was made during a small release party in our hometown," guitarist Andrea Violante told Noisecreep. "It was supposed to be only for a few friends, but it ended up to be the venue's most crowded event of the season."

The song was written before singer Luca joined the band, so, according to Violante, it's "basically an instrumental track, where the vocals just add some colors here and there. This version we played and still are playing live is slightly different from the album song, since we add the trumpets parts that seems to contribute perfectly to the starting mood of the track." The song is also special because it works as "an outline of the album concepts, comparing the shifting movements to these 'Black Waves' that sweep people along."

The band has been sampling 'Shifting' songs at recent gigs, with Violante saying, "As far as we can see, people are just as stoked as we all are about performing 'Shifting' in a live contest. The songs seems to be more powerful and more quiet at the same time -- indeed there's much more dynamic in a live session than in an album -- and this works perfectly in conveying the emotions and moods our music should deliver."

Surprisingly, the trumpets are also favorably received. "Many people especially greeted the trumpets part because it works so good with the rest, in their opinion. Well, I'm not gonna praise my band any further. That wouldn't be fair, but let's just say that people's feedback is awesome!"

With 'Shifting' out now via Lifeforce, Violante and his band bros -- fratelli, in Italiano! -- are hope that American audiences turn their ear to At the Soundawn. "I know it's not easy at all for an Italian band to get into the heart of the international rock/metal scene," Violante said. "But we spent so much passion, sweat and care on this album."

The album's 'vibe' is that the state of shifting is an unavoidable condition that we live in, that the movement of embracing people, cultures, minds and sounds helps us gather our thoughts and make us who we are. Violante also vividly described 'Shifting' as "melting obscure landscapes and oriental impressions with huge streams of guitars and jazzy trumpets melodies, we shift from apparently fragile sonic architectures to solid super-rock yelling quakes."