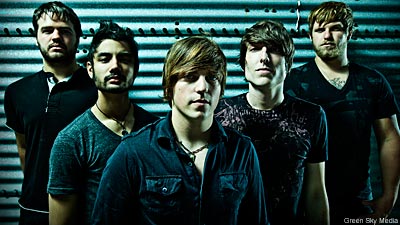 The shoot for 'The Fight (Isn't Over),' the second video from Indianapolis metalcorists Amarna Reign's self-released 'Atonement' EP, almost morphed into a puke fest. "We had lunch right before filming, and there was just so much pizza and nacho cheese going on in such a short amount of time," drummer Josh told Noisecreep. "There were multiple occasions during the shoot when one of us would be at the brink of heat exhaustion/puking. We were going for the 'five really full dudes playing intense metal' vibe when we planned it all out, in the early stages anyway."

Headbanging plus nacho cheese is not an equation for a healthy body, but it ain't no thing for Amarna Reign, who won't remain unsigned for much longer! "After all of the headbanging, nacho cheese and ruining our bodies for the sake of metal, we came up with this. We are all extremely proud of what we created, and we hope everyone who takes the time to check it out can see how much work we put into it," Josh said.

The video features the band performing at the historic Stutz car factory and railroad tracks and the band worked with Jeremy Jackson, who they had fans of for years. "We got to wake up at 8:30 AM, grab a coffee/beer and pretty much headbang all day. Living the dream," Josh said. "The song has always felt large and intense and we were looking for someone that could match that aesthetic visually. We had an amazing location on the top floor of a factory."

So go grab some nacho cheese and watch. But we don't recommend headbanging at the same time our you may yak all over your keyboard.