"We definitely didn't write the song to stir up a fucking hornet's nest. No one in the band claims to be an expert on religion, but the title of the song comes from something that a lot of people actually believe in," laughs Alice in Chains guitarist/vocalist Jerry Cantrell referring to The Devil Put Dinosaurs Here, the title track to their excellent upcoming album.

Noisecreep is sitting in a room at the famed Capitol Records building in Hollywood with Cantrell and drummer Sean Kinney where they tell us that the album stems from a belief held by some religious fundamentalists that Satan planted dinosaur bones into the Earth to dissuade and confuse the faithful.

"They're not wrong for believing that dinosaur stuff, but we aren't wrong for asking them to explain it either," says Kinney. "Are we supposed to believe that some little mythical dude with cloven hooves cruised around the planet hiding bones that were millions of years old to fool us for some fucking reason? It's ridiculous."

Cantrell tells Noisecreep he's sick of the hypocrisy that's taken over many facets of organized religion. "I think there's overwhelming evidence that things aren't working right now. We need to start growing up as a people. When you're teaching people that being gay is a mortal sin, yet a good portion of the people teaching this are fucking kids, there's a huge problem," the guitarist tells us.

"It's insane when a religion tells you it's OK to strap a bomb on yourself to blow someone else up because they believe in something different. If a religion is teaching you that it's OK to hurt somebody, exclude somebody, dominate somebody – I have a problem with it. 'The Devil Put Dinosaurs Here' just speaks to the lamer parts of how those things are taught and the shitty things we do to each other because of our different beliefs." 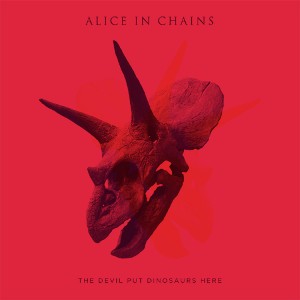 Alice in Chains' fifth studio album, The Devil Put Dinosaurs Here, is out on May 28.