"We made a unique record that's completely different from anything we ever did," Alice in Chains guitarist Jerry Cantrell told Noisecreep about the album. "It encapsulates a period of time, like all records do. You see growth and that the band is moving ahead in new territory that we haven't been to before, but we haven't lost our identity."

Check out the cover art for The Devil Put Dinosaurs Here below. 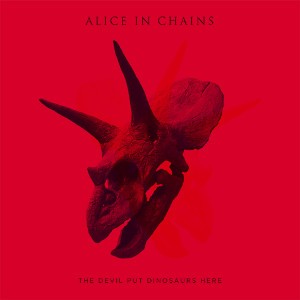 The Devil Wears Prada will enter the studio on April 22 to begin recording their next album. Killswitch Engage guitarist and uber producer Adam Dutkiewicz will executive produce the platter, which is the band's first for Roadrunner Records.

It was only a matter of time before guitar god, the beefy and burly Zakk Wylde got a burger named after him. Grill 'Em All has created the Berzerker Burger, consisting of two blackened half-pound patties, Eagle Rock Solidarity battered onion rings, white truffle pomme frites, chipotle ketchup, cheddar and thick cut bacon all smothered in chili. Is your mouth watering yet?

Metalheads and burger enthusiasts will be able to wrap their lips around this delicious meat treat beginning Saturday, April 20 at Grill Em All's restaurant located at 19 E. Main Street in Alhambra, California.

The Melvins have covered Queen's "You're My Best Friend" and you can listen to it here. The song will appear on the band's forthcoming Everybody Loves Sausages covers album, out April 30 on Ipecac Records.

The old school Cleveland band Integrity, lead by Dwid Hellion, will release Suicide Black Snake on June 11. The vinyl will be released by A389, wile the CD will come out via Magic Bullet. The band plans to tour, as well.