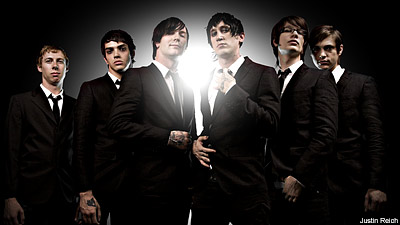 "We went back to our roots," Alesana vocalist/guitarist Shawn Milke told Noisecreep about his band's new album, 'The Emptiness.' He continued, "[Guitarist] Pat [Thompson] and I wrote all the music and we put ourselves in the mindset of where we were mentally on our first record, which also happens to be our best-received record. We were trying to get back to where we were then, when we were always having 'Almost Famous' playing on the TV in the background, when were writing. We had that movie playing upwards of 14-15 times a day, looping, with no sound." The youthful hunger that defines the characters in the movie has certainly crept into the music on the band's latest.

Musically, 'The Emptiness' finds the band tempering some of their screamy rage in favor of a more measured dose of melody and maelstrom. "We are not longer a train on full throttle," Milke readily admitted. "We are more mellow and there are somber moments that set up the heavier moments on this new album." But that's not the only sonic shift that happens on the dimly titled 'The Emptiness.' Milke composed with a string quartet!

"I worked with the Portland City Symphony. I got to the studio where we recorded in Portland and mentioned that I wanted to do that to the producer, that I wanted to work with a local symphony. He said, 'What's the harm in contacting them?' The rates were good and we did it!" Such lush instrumentation no doubt complements the band's extended concept on the album, which is a love/horror thematic hybrid.

'The Emptiness' is due in stores Jan. 26 via Fearless Records.