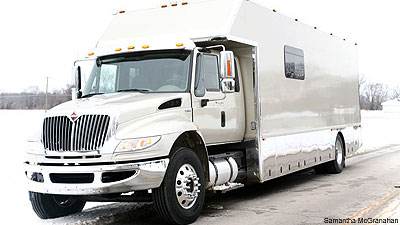 Touring is expensive. Traveling cross country in a bus can cost a band upwards of $30,000 per month. That's astronomical for up-and-coming bands -- and even for some mid-level, growing and established acts. Touring in a van also has its cost inefficiencies; hotel rooms are often a necessity, and that gets pricey, which means you may have to go days without sleeping in a bed or a shower if you can't always afford sleeping accommodations.

That's where BangWagon comes in. The company offers RV coaches that are cheaper than -- but every bit as luxurious as -- full-sized buses, with metallers like High on Fire, Behemoth and Alesana employing them. The company estimates that the total cost for a 25-date tour is $7,500, sans fuel, which is half the price of a budget-gobbling bus. 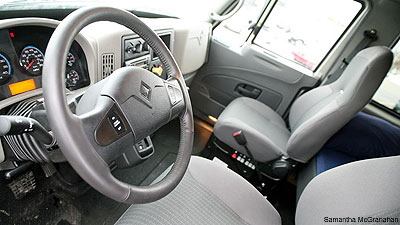 While BandWagon, based in Indiana, have seven vehicles that are road legal, they have a lofty goal. "We are shooting for 30 by Warped Tour and Mayhem next year," agent Jeremy Clarke told Noisecreep at South by Southwest, where he parked the vehicle for bands, managers and label execs to see firsthand. "It's half the price of bus. It sleeps eight and there is a ninth bunk for the driver or a friend or merch person who tours with you."

The economical BandWagons are roomy. In fact, they're six inches wider than a regular tour bus, yet feature all the same amenities. They are perfect for entertaining the ladies, for eating, for working. They make the often stressful life on the road a bit more bearable. You have to be 25 to drive and rent one, but it doesn't require a CDL. (That's a commercial driver's license!) There is also a shower and a toilet, so you don't have to rough it. BandWagons are affordable and comfortable. 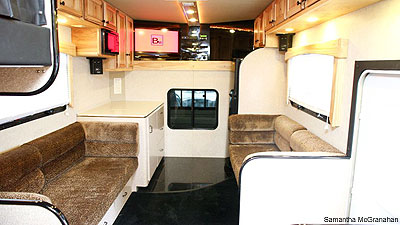