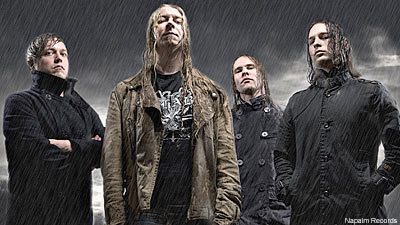 Teutonic funeral doom maestros Ahab recently launched their latest foray into the world of the down-tuned via Napalm Records. The nautically-themed band has followed the sea trail they first embarked upon with 2006's 'The Oath' EP to deliver 'The Divinity of Oceans,' a melancholy yet crushing masterwork. Drawing on Herman Melville's immortal tale of man vs. nature for their lyrics, and delving ever deeper beneath the waves in search of meaning, Ahab have truly come into their own with this release. Vocalist Daniel Droste graciously agreed to speak with Noisecreep about the essence of doom, the band's dynamic and what the future holds.

Funeral doom is not the happiest sort of music to be involved in; the name kind of gives it away. Your songs all feature a certain desolate, mournful quality, and move at a dead man's pace; what sort of emotions do you feel when writing, rehearsing, and performing Ahab songs?

Hard to say ... well I guess I just tried to use the pictures that came to my head after I the story to compose the music, tried to imagine the whole scenery of beeing lost on the ocean, half dead and helpless. At rehearsals or especially on stage it feels like a raising inner storm ,setting free energy through music.That gives me strength and satisfies me.

Do you listen to other funeral doom bands like Evoken, Nortt, Wormphlegm, Uaral, or Catacombs? Is this a style of music you prefer to play rather than to listen to, or do you enjoy it equally on both sides of the fence – as a fan and as someone who creates it?

I have some CDs of the bands you mentioned and listened a lot to it in the past. I'm not listening that much extreme metal in general at the moment and prefer rock, stoner -- and traditional doom music at the moment. Like I told you above ... I wouldn't name our style funeral doom, although there are a few elements left. But of course I enjoy both, listening and playing our own stuff, otherwise i wouldn't be involved in this band anymore.

Several members of Ahab play in other bands, including Napalm labelmates Midnattsol. How does this effect Ahab as far as the band' dynamic is concerned?

I have no problem to play in Ahab and Midnattsol. With Ahab we'll promote our new record live this year, and with Midnattsol we'll write new songs at the moment. Besides Ahab is not a typical band that is meeting in a rehearsal room once a week. Cornelius and Stephan our new bassist play together in a death-metal band called Dead Eyed Sleeper. So now I have two bands, Stephan has two bands, Cornelius even is involved in three bands, so there's just the lack of time to rehearse. On the one hand that's ok because I am able to arrange my weeks with getting everything managed, on the other hand I sometimes miss playing with the guys because I really enjoy playing this kind of music.

What've you guys got planned for the rest of 2009? What's next for Ahab now that your new record's been released?

We'll play a tour through germany in September, headline a show in belgium and play live as often as possible to promote our new record.

Can you name a few bands -- German or otherwise -- that you feel deserve some more attention?

There are many but I have to name my bandmates' death metal band, Dead Eyed Sleeper, otherwise I'd be afraid that they kick my ass after reading this!

What upcoming albums are you most looking forward to in 2009?

I just read that there'll be a new release from Porcupine Tree this year, I'm really excited for this one!