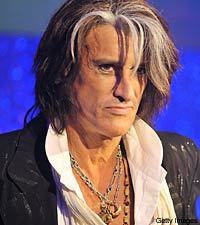 For more than a month now, Aerosmith fans have been kept in the dark about the Boston rockers' future. Or at least the band's future with frontman Steven Tyler. Ever since Tyler took a nosedive off a stage in Sturgis, S.D. in August, effectively nixing the rest of the band's summer tour, everyone's been wondering what's up with Aerosmith, and Rolling Stone has attempted to clarify the situation. What did they find out? Well, things aren't good.

The mag spoke to guitarist Joe Perry, drummer Joey Kramer, guitarist Brad Whitford and the band's former A&R rep John Kalodner, to find out what's been happening in Aerosmith's world, and according to Perry, Tyler wants to take "two years off from the band," and the rest of Aerosmith "is kind of figuring out what we want to do." But replacing Tyler with a new frontman isn't out of the question.

"Anything is possible at this point," Perry says; the article namedrops Lenny Kravitz as a possible replacement. "We are still trying to figure it out. This is kind of new. I just found out that he had reiterated that he wanted to take that time off to do what he was going to do. We're going just look at all our options. Steven has made it pretty clear; he wants to go off and do what he wants to do. But the band isn't going to wait around. Aerosmith is too good a band to sit around and twiddle their thumbs."

Perry says he's not sure fans would accept a new singer, and feels that the current problems between the band and Tyler are not personal. "I really don't know what's going on," he says. Perry added that all communication the band has had with Tyler has been through his manager, and that they haven't really spoken. The last time they did, Tyler hung up on Perry. It was when the singer secured new management that Tyler started "pulling away," the guitarist says.

Kramer says two years is "a long time," and that Aerosmith is itching to write together for the first time in 10 years. They're not willing to wait. That means they'll need a new singer. "It's hard to imagine getting onstage without [Tyler]," he says. "And you know, make no mistake about it, I love the guy, Steven's been my brother for 40 years and I've always been there for him and I'll always be there for him and you know, I can only hope and pray and you know ... I'm sorry, this is kind of emotional for me. But you know I hope that Steven takes the time to put the focus on Steven and get healthy and take care of himself."

Kramer, who says the band's been talking to "famous singers" to take over behind the mic, infers that Tyler -- who has struggled with addiction -- may have relapsed because his behavior's been strange. Whitford elaborated.

"His behavior suggests to me that he's ... he doesn't act like a sober person," Whitford says. "He's had this history of drug abuse that is well documented. And like many other people in this same position, you know the prospects aren't good. For most people, full blown recovery is a tough thing to pull off."

Whitford says that there's "been a serious lack of commitment on" Tyler's part for some time now, and "we've been trying to make an album for a few years and he's been the guy that suddenly one day he just doesn't show and the next thing we know he doesn't want to work, he doesn't like the producer, whatever. And we've had these sort of no-show issues with him and tour cancellations and these cancellations have been going on for some time. This unpredictable behavior has just gotten more bizarre and more frequent."