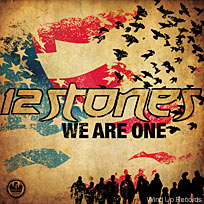 New Orleans-based radio rockers 12 Stones are gearing up for their first release since 2007's 'Anthem for the Underdog' with a barn burner of a first single, 'We Are One' -- which is, incidentally, super anthemic, with a driving, ultra-catchy chorus. It's as though the tune was written expressly to get juices flowing, blood pumping, testosterone kicking and energy roaring.

Turns out, the song, which you can listen to exclusively here on Noisecreep, was inspired by 12 Stones' recent trip to San Diego, where they played for troops at Navy SEALs Convention in Coronado. The only thing tougher than a gathering of Navy SEALs would be a Chuck Norris roundhouse kick!

Listen to 'We Are One'

"Prior to playing the event, we were lucky enough to go to the actual Navy SEALs training camp and participate in some of the various obstacles that the SEALs have to go through," guitarist Justin Rimer told Noisecreep. "It was a simply amazing experience, and we have a whole new respect for what these guys do and the sacrifices they make.

"12 Stones has always been a big supporter of our troops and the lives they lead to ensure our freedoms, but I think this experience, in particular, really opened our eyes even more to the harsh reality that is their lives. And not to mention how bad ass these dudes really are!"

'We Are One' has a bit of a sports arena vibe as well, and we can imagine the song bellowing in the hallowed halls of a hockey arena or a baseball stadium on a hot August night. Hell, it would have been the perfect sonic accompaniment to the Super Bowl Champion New Orleans Saints during their parade in the hometown they share with 12 Stones, something Rimer acknowledges.

"We truly wrote this for our troops, but sure, when we were writing it, we knew we had the opportunity to connect with people on so many levels," the guitarist said. "'We Are One' is a statement for all types of people and all types of situations. I think many sports teams can really latch onto this song. I would love to hear it in as many sports arenas as possible. Go Saints!"