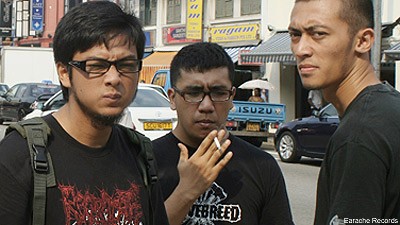 Recent Earache signees Wormrot have a lot to live up to. Hailed as both a much-needed return to the label's grinding roots and the heirs to now-defunct but always pissed Texan grind horde Insect Warfare's filth-encrusted throne, the grindfreaks behind 'Abuse' have more than proven themselves, releasing scores of demos and LPs on local DY labels and spreading their disease as far past the Singapore borders as possible.

Their extreme noise terror reached the ears of Earache head honcho Digby Pearson, and the rest is history. One must wonder, though, what has it been like for this young band growing up grind in their troubled Southeast Asian homeland? Is there a 'Singapore sound' that the world's been missing out on? Vocalist Arif took Noisecreep through the ins and outs of his homeland.

"Frankly, currently it's not that active here. Yes, there are newer bands popping out, but there's hardly shows. So

I personally can't tell how the scene is doing. Dominant scenes? I don't think so. Shows can be throughout weekends

or sometimes none for a very long time. Although ... there are few bands I would like to shout out like Asilent,

etc., there's definitely no dominant scene. And as for grind, there's not much here in Singapore."

Arif makes things sound a bit dire, but surely there are a few brave souls kicking around the underground and doing their best to keep the good times rolling. After all, Wormrot themselves have managed to appear on no less than nine releases in their short lifetime (of about three years and counting). Someone's releasing those records, and even more people are buying them. Arif agrees.

"Scrotum Jus Records is doing an excellent job, but mostly deal with overseas bands. There's few metal record shops here in Singapore, like Hell's Labyrinth, Ignite, Inokii and Roxy. It's possible to order releases overseas through them as well. Another active label in the DIY scene is Fight Back to School Records, who support every inch of grind, powerviolence, emoviolence ... to come to Singapore. Cynical Sounds is doing great as well bringing in huge ass bands like Dismember, Malovelent Creation and more. In fact they will be bringing in Misery Index this coming April.

"It is not often we have the chance to bring in more varieties of big bands here just to keep up and uphold the small scene we have, but it's the best they can do, and it's definitely better than nothing. I really appreciate this, and maybe there's more doing their job to keep the scene alive. It's unpredictable; sometimes it's active and sometimes simply nothing for a while," he shrugs.

With a full-blown European tour in the works and an upcoming Earache reissue of their 2009 platter of splatter, 'Abuse,' the future's looking pretty bright for Wormrot. Here's hoping that their newfound international success will filter back down to their roots and inspire the scene at home.