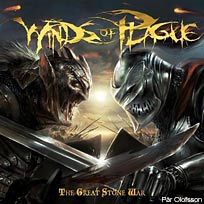 For Winds of Plague's sophomore effort, 'The Great Stone War', the band sought out the talents of Sweden's Pär Oloffson, who also created the art for their debut on Century Media. The album's lyrical concept depict a future war on a worldwide scale, when humanity has regressed into stone-age technology and will fight to the end of civilization. "Johnny [Plague, vocalist] contacted me last December and presented his idea for the new cover," Oloffson told Noisecreep. "He wanted two armies facing each other, an angelic medieval looking soldier on one side and on the opposing side a demonic soldier."

The concept of the confrontation between two side of a war was going to span more of the release's layout. "This was to be the centerpiece in a 3-booklet," Oloffson went into further detail "And as the 3 pages open up on each side is reveals more of each sides army. After working a couple of days it was decided to extend the booklet to 5 page so 2 more pages was added on each side. With a total of 5 pages of good and evil armies swinging swords and slobbering the amount of work was huge!"

Oloffson's grandiose, bold, and colorful strokes worked well for the band's brand of symphonically-laced brand of deathcore. The previous cover, for the album 'Decimate the Weak', featured an otherwordly samurai brandishing bloody katana blades and standing on a pile of his victim's corpses. Oloffson's tendency towards the fantastic and fantasy-based worked well with the concept outlined in the album's lyrics, as a clash between two groups: the religious and the demonic.

Oloffson has a broad portfolio of art for metal bands, ranging from The Faceless, Braindrill, Dethroned, and Severed Savior, as well as clienteles like websites and publications.