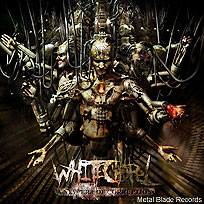 When Noisecreep last checked in with graphic artist Brent Elliot White, the acclaimed, monumental cover art for Job for a Cowboy's 'Ruination' was featured in July 2009. White outdoes himself again with Whitechapel's 'A New Era of Corruption,' and his work for Cowboy played a part in his signing on for Whitechapel's new release.

"I was glad to get back to work on another album heavy on concept," White told Noisecreep. "The track titles and lyrics were so descriptive I made it a personal challenge to add an element of each into the piece. So there's a little 'Where's Waldo' when it comes to figuring out where all the tracks are in the piece."

With track names like 'Reprogrammed to Hate', 'A Future Corrupt', and 'Necromechanical,' it's no wonder that the album art turned out as it did. A series of half-mechanized humanoid figures, fused with electronics and suspended by cables, await the completion of their creation -- a forboding scene reminiscent of landmark sci-fi films like 'The Terminator' or 'Ghost in the Shell.'

"Because I needed plenty of symbolism while keeping with the concept," White explained, "I referenced Kali (A Hindu goddess associated with death) for the motif. With all those hands and arms flailing about, there were lots of 'non-verbal' opportunities for symbolism."

Some members of Whitechapel also had a conceptual hand in the process, with positive results. "[Guitarist] Alex [Wade] and [drummer] Kevin [Lane] kept me in line with plenty of thoughts and suggestions," White said. "Those suggestions turned out to be on point, and we came up with what I feel to be a really strong cover that says 'A New Era of Corruption.'"

Whitechapel will be touring everywhere in the U.S. this summer in support of 'A New Era of Corruption' as part of the Warped Tour.

Download Whitechapel Songs
Filed Under: job for a cowboy, JobForACowboy, whitechapel
Categories: News
Comments
Leave A Comment
Back To Top