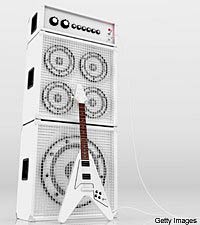 Decisions, decisions. Today, two new eagerly-awaited albums land in stores: Killswitch Engage's self-titled latest, and Suicide Silence's 'No Time to Bleed.' Remember back to when you were younger, and you had limited means? If two albums dropped on the same day, and you could only afford to get one of them... what a dilemma! You'd have to wait a week or more before you could have both. Today, though, kids don't even buy records. And if they did have limited funds, they'd just buy one and illegally download the other. It's a crazy world we're living in, folks. So crazy, in fact, that one of the most beloved metalcore acts has, within the last 24 hours, lost its drummer, unexpectedly. It's White Noise, and it begins now.

+ So, drummer Mike "Ratboy" Novak has left Every Time I Die, citing "personal conflicts." He confirmed his departure to Lambgoat.com, saying in a statement that "I feel like I'm getting myself out of an uncomfortable, unhealthy situation, and it's for the best for everyone, and I'm ready to move on with my life." Novak says he plans to continue bashing the kit, and is "looking for a new project to pursue. This is a new exciting chapter in my life and [I] hope anyone who has enjoyed me as a person/ drummer in this band for the last 11 years sticks with me for whatever endeavor the future brings me."

Meanwhile, ETID frontman Keith Buckley took to his Twitter page yesterday, and posted a rather ominous update, presumably about Novak's quitting. "A weight I had carried for so long that I didn't even realize how heavy it was has been lifted," he writes. "The future's so bright, I gotta wear shades." At this point, there's no word on what the band intends to do to replace Novak, and its unclear how his leaving will impact the expected September 15 release of ETID's new one, 'New Junk Aesthetic.'

+ Slayer have revealed more information about their forthcoming album, 'World Painted Blood,' which should be in stores later this summer and we're hoping is better than 'Christ Illusion.' The band tracked 13 songs for the effort, and some of the tentative track titles are "Beauty Through Order," "Playing With Dolls," "Public Display Of Dismemberment," and "Psychopathy Red."

+ The other night, we managed to catch Aerosmith's gig at Jones Beach, and if you're a fan of Aerosmith's deeper cuts, you shouldn't miss them on this tour. As for future Aerosmith recordings, guitarist Joe Perry says new music is on the way, but the recording process has been delayed because, well, the guys are getting older. When asked in a recent interview whether he was frustrated the album has been pushed back, Perry said, "Only about a million percent. I had to have my knee replaced over a year ago and I was just about healed up and it got infected. That pushed everything back and we lost a lot of time trying to work out our schedules. And then, finally, we got some time and we got the ball rolling and we had the songs; we were getting ready to cut the songs and Steven got this bronchitis that turned into pneumonia at the same time, was getting an ear infection and they had to pierce one of his eardrums and it was just one of those things.

"I mean, this really bad flu bug that's been going around, he got a really bad infection, just that bronchitis and he couldn't sing," Perry continued. "So that just was one of those things. It was going to take four weeks for it to heal. And we just couldn't do it and still make the tour. And at that point the tour had been booked. We were hopeful we'd have the record out and then tour behind it, but it just wasn't meant to be." Instead, Perry said he took the time to work on his own music, and will have a solo LP out before the summer's over.

+ The Shadows Fall dudes are out in Los Angeles (we know frontman Brian Fair was at last night's Los Angeles Dodgers game), where they'll be shooting a video tonight, and there's still time for you to be a part of it. The band is seeking extras for the shoot, which starts in Seal Beach, Calif., at 5PM PST and is expected to wrap at 10PM. Want in? Email your full name, phone number, and age to shadsvideo@gmail.com.

+ Skeletonwitch have started tracking their next album, which they've titled 'Breathing The Fire.' The disc is being recorded with producer Jack Endino in Seattle, Wash. at both Studio Litho (owned by Pearl Jam guitarist Stone Gossard) and Endino's own Soundhouse Recording. Look for that effort to be in stores in October.

+ Not that they're true metal, but Massachusetts rockers Seemless have thrown in the towel. The band, which featured original Killswitch Engage frontman Jesse Leach, formed in 2002 and release two albums through Equal Vision Records. A final show has been scheduled for September 12 at the Lucky Dog in Worcester, Mass.

+ This is just hilarious. MetalSucks has assembled a gallery of heavy metal high school yearbook photos, and they're amazing. Metallica members, Megadeth's Dave Mustaine...this, you have to see.