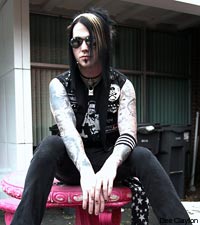 Although horror rocker Wednesday 13 has left the ghouls and goblins behind with his new band Gunfire 76, that doesn't mean he's turned his back on slasher flicks. The North Carolina native recently went to see Rob Zombie's 'Halloween II'.

"I wasn't a huge fan of the first one that he did," Wednesday told Noisecreep. "I liked the first half of it -- the building of the characters and the dialogue. This one seemed a little rushed to me. I'm not going to pick a movie apart. I paid $10 to get in, if there's one awesome scene to make it worth the $10, I'll walk away and won't bad-mouth it.

"So the movie was going on, and I thought I was going to bad-mouth it 'cause I didn't like it at all. Then there was one kill scene that was worth the price of admission -- he actually stomped the guy's face into nothing. He did it like four times!"

The scene in question wasn't just good for Wednesday 13 because it was gruesome, either. The realism is what did it. "The only other head stomping I've seen in a movie that looked real was in 'American History X' when they made the guy bite the curb. This was like actually seeing a guy's head get smashed in by a seven foot giant. I thought that was pretty cool. I didn't really like the plot, but the kill scene was worth it. I try to find little things like that. I wasn't a huge fan of it. But at the same time, I was going to see it. I have Michael Myers tattooed on my arm, so it wouldn't be right if I didn't see every 'Halloween' movie that was ever made."

Another intrinsic element of who Wednesday 13 is, Kiss, are due to release a brand new studio album, 'Sonic Boom', on Oct. 6 exclusively at Wal Mart stores. "I've heard 'Modern Day Delilah' -- terrible name for a song. Kiss is a lot of things. I'm not a Kiss basher; I'm a Kiss fan. I know they've done a lot of terrible stuff. They've milked that name for everything it's worth. There are some fans that won't acknowledge that Kiss exists anymore. I'm over the whole thing. I don't get mad at Kiss. I look at Kiss as Superman or Batman; they're characters. I don't look at the things they do," Wednesday revealed. "When they say stuff, I rarely believe it.

"When they said the new album is going to be like 'Rock and Roll Over' -- yeah right. It'd be nice if it was 'Rock and Roll Over,' but it's not going to be. This first song sounds like early-'80s Kiss. 'Rock and Roll Over' is my favorite Kiss record. But at the same time, I'm going to go and see Kiss on this tour," he admitted. "I'm going to buy the record the day it comes out. I'll probably buy every cool bit of merch that Wal Mart has. Everything in my house is pretty much Kiss. I have just about every little thing they put out that looked cool -- the dolls, the blood-spitting water fountain, I have everything. I'm a huge Kiss fan.

"I think there'll be a couple of decent songs on the new album. We'll see."