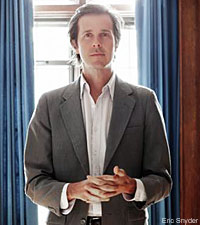 Quicksand may be one of the first true post-hardcore bands, and that's why people still ask former frontman/guitarist Walter Schreifels about Quicksand. Fans wonder if the band will ever get back together and/or tour again, because they were so belove. But it doesn't bug Schreifels, even though he has since moved on.

"People do ask that, and it's nice to be a part of something that people miss," Schreifels told Noisecreep. "As far as being 'the guy from Quicksand,' it's a nice thing to have juxtaposed with my solo record or even my 'guy from Gorilla Biscuits' or Rival Schools persona. I feel closest to the music I'm making on my own, but I have a good feeling about the work I've done in the past, too. It's all part of the same thing to me."

Schreifels is releasing a solo album, 'An Open Letter to the Scene,' which has a very hardcore-influenced title, on May 4. He's always been in bands, but he's happy to go it alone this time out. "I like setting my own schedule and pace," he said. "In a band, people are on different speeds, have different lifestyles and priorities and go at problems in different ways. There are also egos, and mine is no exception. You have to respect that to make things work. As a solo guy, it's nice to just do things in a way that I'm comfortable without worrying about other people concerns. That said, being in a band is also nice."

OK, so we have to be like the fans asking probing questions. What's the status of Rival Schools? Schreifels only revealed a smidge of information, saying, "We have a record finished. It'll come out mid-summer, and it's awesome."