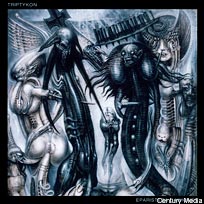 Triptykon's 'Eparistera Daimones' is the Swiss band's debut album, but it already carries with it a lot of weight in the metal community. This is the new project of Thomas Gabriel Fischer of Celtic Frost and Hellhammer fame. In parallel with the legendary nature of the band, the cover art featured is a painting by none other than surrealist painter H.R. Giger, who is most widely known for his creature design in the 'Alien' film.

Not to go unmentioned is the work done inside the CD packaging, done by New York-based artist Vincent Castiglia, a contemporary of Giger's and the only American artist to be patronized by him through his exhibition invitation for Castiglia 1st solo show at the H.R. Giger Museum Gallery.

Castiglia painted a portrait of the band members for the layout. "Tom G. Fischer had initially proposed the idea in 2008 while I was in Switzerland for my exhibition at the H.R. Giger Museum Gallery," Castiglia told Noisecreep. "When he'd asked if I'd be interested in working on artwork for the album, not only was my response self-evident, but I was so incredibly honored by this. Tom has become a close friend over the past few years, possibly my closest."

Castiglia restricts himself to painting in blood, rendering all of his art into shades of red -- but what each image lacks in variety of color is compensated by a detailed sense of realism and the striking imagery of the healthy human form fused with the human form after death.

"In terms of my creative approach in the painting," Castiglia said of his contribution, "my aim was to make it as harmonious of an image as possible, conceptually and compositionally, considering every band member and their qualities, the group as a whole, while simultaneously painting it with a style distinctly my own. What Triptykon represents, and what 'Eparistera Daimones', the title of the album itself means, is wholly embodied in this painting, a hieroglyphic portrait ... the emblem of Triptykon."