Although we've been graced with tons of unquestionably classic images throughout the years, metal has also produced some utter garbage in the cover art department. Most of the time these crimes have been committed by lesser acts within the fringes, that doesn't mean some of our heroes haven't let us down. Noisecreep presents our list of 10 worst album covers from otherwise killer bands. 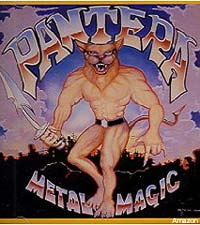 We all can relate to being embarrassed by photos from our teen years. We have to keep that in mind when looking at the cover of Pantera's debut album, 'Metal Magic.' At the time of the record's release, the late great 'Dimebag' Darrell was only 17 years old. He was actually going under the name 'Diamond' Darrell back then, and the band was playing something closer to the Sunset Strip-approved hard rock of Van Halen than the thrashy groove metal of their later work. We just don't understand how the cover art for 'Metal Magic' got approved by the guys in the band. There's no way in hell that Phil Anselmo would have been cool with this if he were in the band yet. It looks like something Napoleon Dynamite would have drawn up in his movie. Is it a liger? 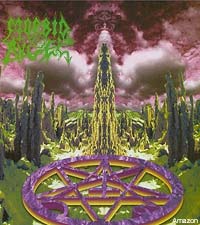 After unleashing fantastic covers for albums like 'Blessed Are the Sick' and 'Altars of Madness,' how could Morbid Angel do their fans, and themselves, like this? The front of 'Domination' looks like a rejected cover for an Insane Clown Posse mixtape. Even though they kept their iconic band logo plastered onto the left corner, the cover still doesn't conjure up feelings of the kind of adrenalized death metal found inside it. The mucus-like color scheme and dated computer graphics do not help the cause either. 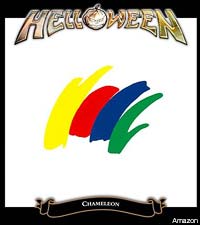 Words like 'uninspired' and 'lifeless' come to mind when looking at this Helloween album cover. Was the color flag image culled from rejected submissions for the 1992 Summer Olympics advertising campaign? Is this the same metal powerhouse responsible for the 'Keeper of the Seven Keys' saga? Then again, Helloween also gave the world 'Pink Bubbles Go Ape' just a couple of years prior to this wretch. The band luckily rebounded in the art, and for that matter, the music department, later on in their career. 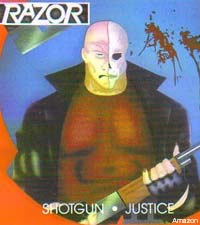 This looks like a bad artist rendering of some obscure straight-to-VHS Mexican action film poster from 1981. Razor are one of the most underrated metal bands of the 1980s but this cover for 'Shotgun Justice' fails on so many levels. They would have better off just using a photo of Charles Bronson or some other action film icon to get their point across. OK, that might have been costly to clear. But surely there must have been other options. Couldn't they have just had a contest where fans submitted artwork? That would have definitely produced better results than this. 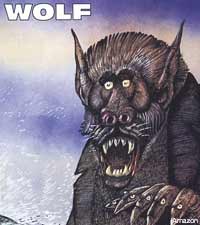 This Swedish combo loves their metal the old-school, Accept and Metal Church kind of way and they do a tremendous job of infusing it into their songwriting. We're just not sure what they were thinking when they greenlit the cover artwork for their self-titled 2000 album. Couldn't they have found a better drawing of a wolf somewhere? Not even the most hardcore Wolf fan would wear a T-shirt emblazoned with this laughable image. 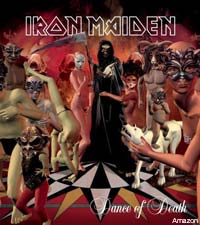 This one is a hot mess! It's so ghastly that artist David Patchett wanted his name off the final credits. Supposedly he had turned the cover image into the band as a prototype but Iron Maiden decided to run it as is. According to a Maiden fan site, there are several errors on the cover too. Why the legendary metal titans don't work with their original artist Derek Riggs is a mystery but crap like 'Dance of Death' makes his absence all the more obvious. 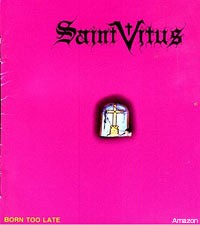 Although these Californians have gone on to influence countless bands since their start in 1979, the cover artwork for their 'Born Too Late' album is incredibly misleading. Forbearers of the stoner/sludge rock scene, St. Vitus have always looked like a gang of PCP-crazed bikers but the hot pink sleeve on this 1987 collection is more Enuff Z'nuff than it is Steppenwolf. 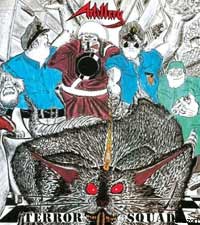 This Danish speed metal outfit never cracked the States but it wasn't for a lack of top-notch material. Albums such as 'By Inheritance' and 'Terror Squad' are worth seeking if you enjoy bands like Megadeth and Heathen. Unfortunately for everyone, the cover art for the latter album is a visual atrocity. Is that a cop holding a gigantic sewer rat? Wait, is that doctor really chasing the rat with a hypodermic needle? Did a little kid sketch this out with colored pencils? The biggest offence of this entire debacle is that another label reissued 'Terror Squad' in 2008 and didn't change the artwork! Talk about a squandered opportunity. 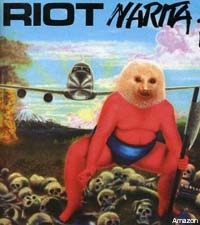 In 1979 the art department at Capitol Records must have been out of their collective minds. The cover for Riot's 'Narita' album is evidence of that. Yes Noisecreep nation that IS a sumo wrestler with the head of a seal. The N.Y.C. metal pioneers crafted some blistering records throughout their three-decade-long discography, but you would be hard pressed to find anyone on the planet that digs the cover for 'Narita.' 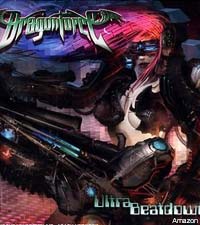 The artwork for DragonForce's 'Ultra Beatdown' looks like a mix of a bad video game from 1986 and the cover of an obscure hair metal EP. This album cover would lose in a fight against a Cattle Decapitation one. We don't have anything more to say about pick.